The GLR 23 motorcycle adventure route leads you for over 446 kilometers through the Aragon and Catalonia regions of Northern-Spain. 257 of those kilometers will traverse over off-road sections. If the going gets tough, The Back-up Tracks will support you with 17 different sections. With a total of 4 connecting GLRs to this GLR 23, you’re able to continue to Adventurise the region. Let’s get going! 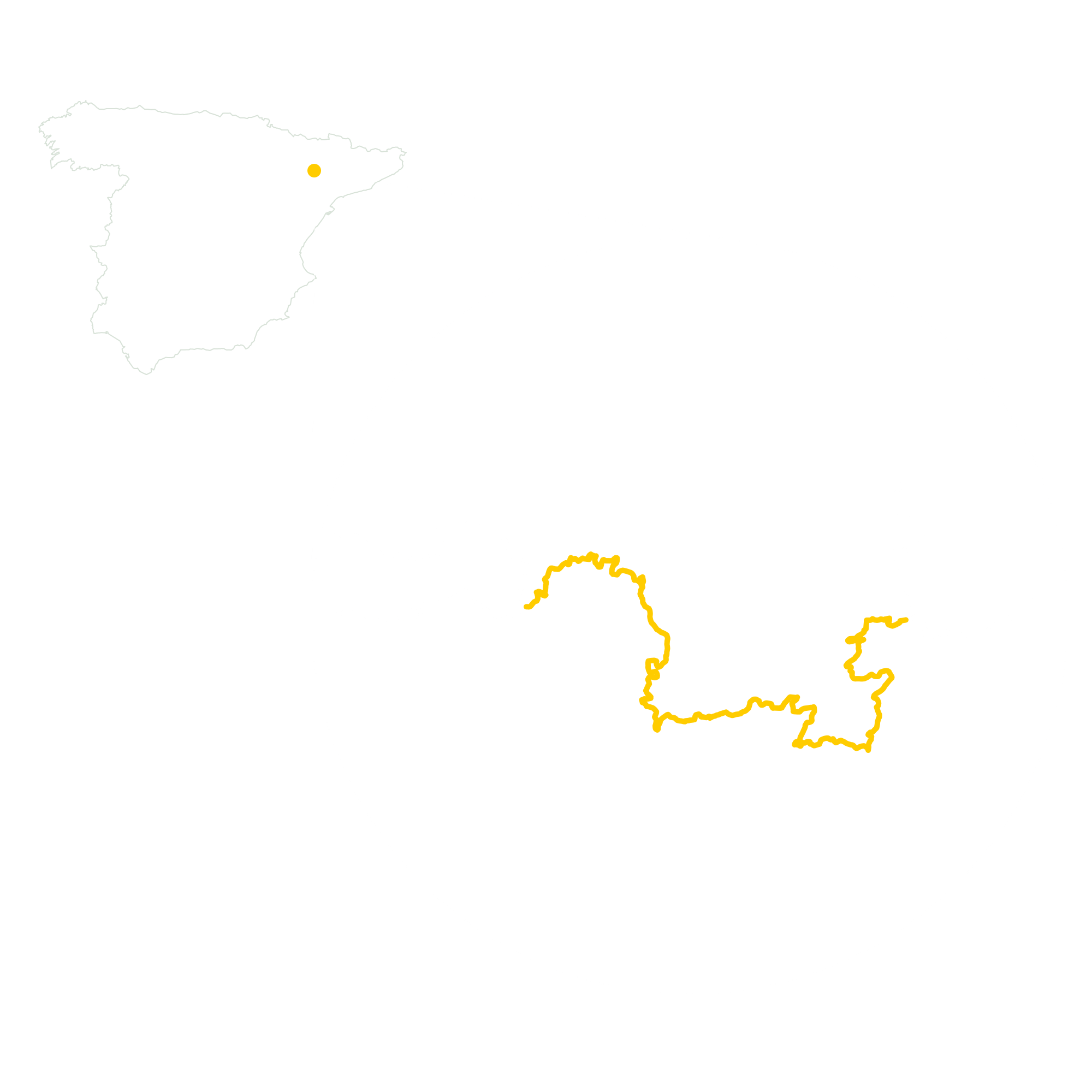 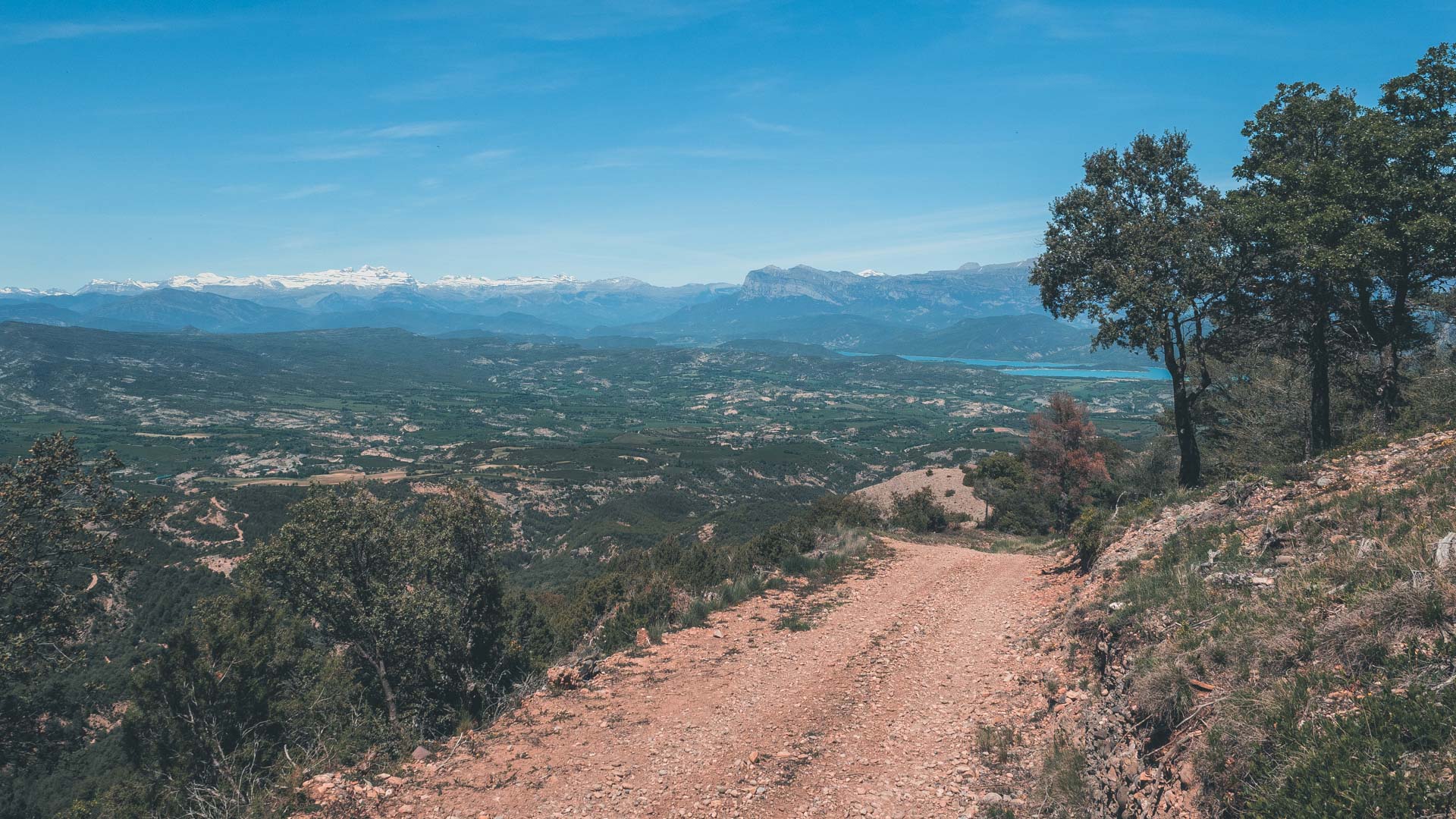 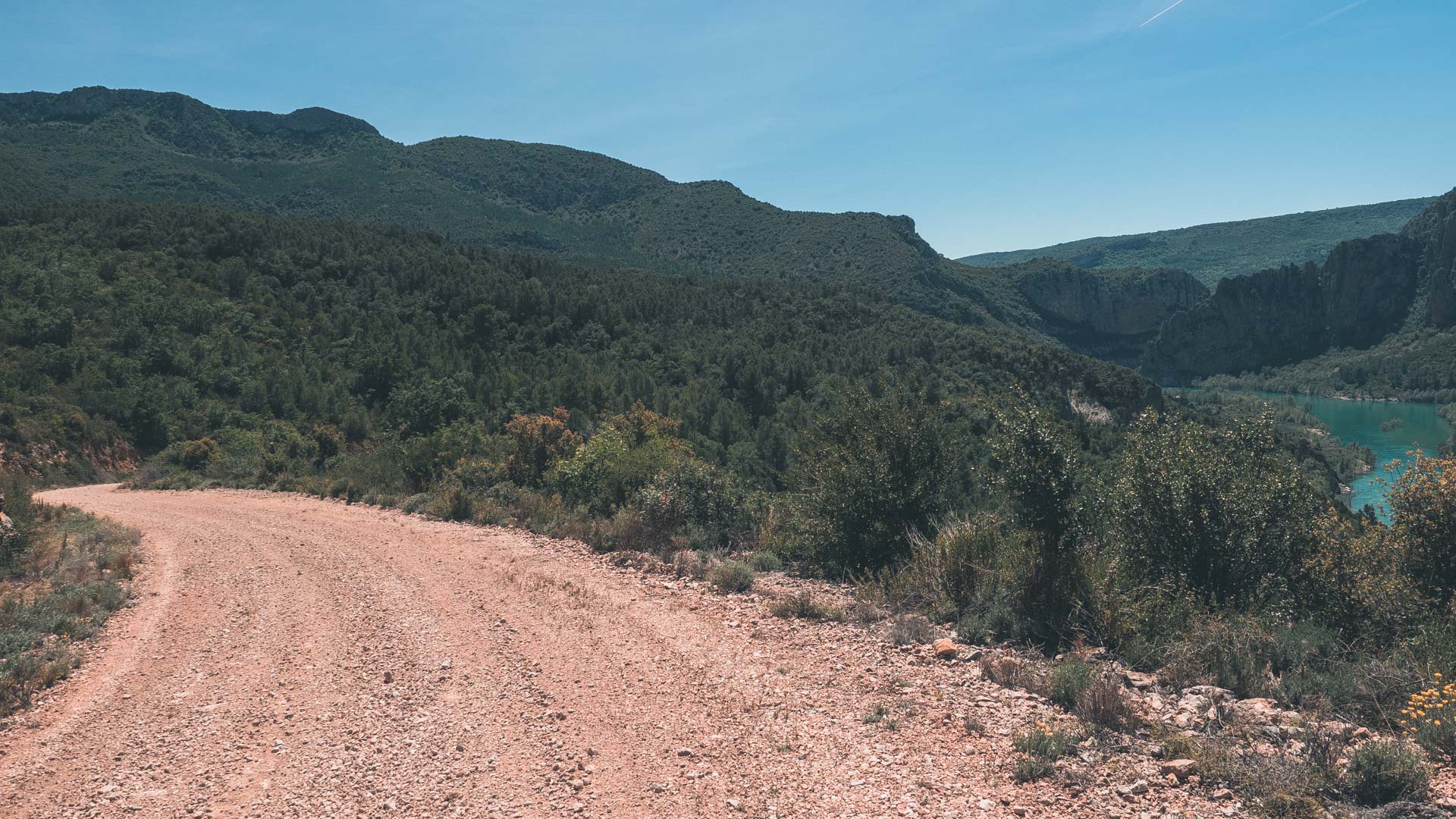 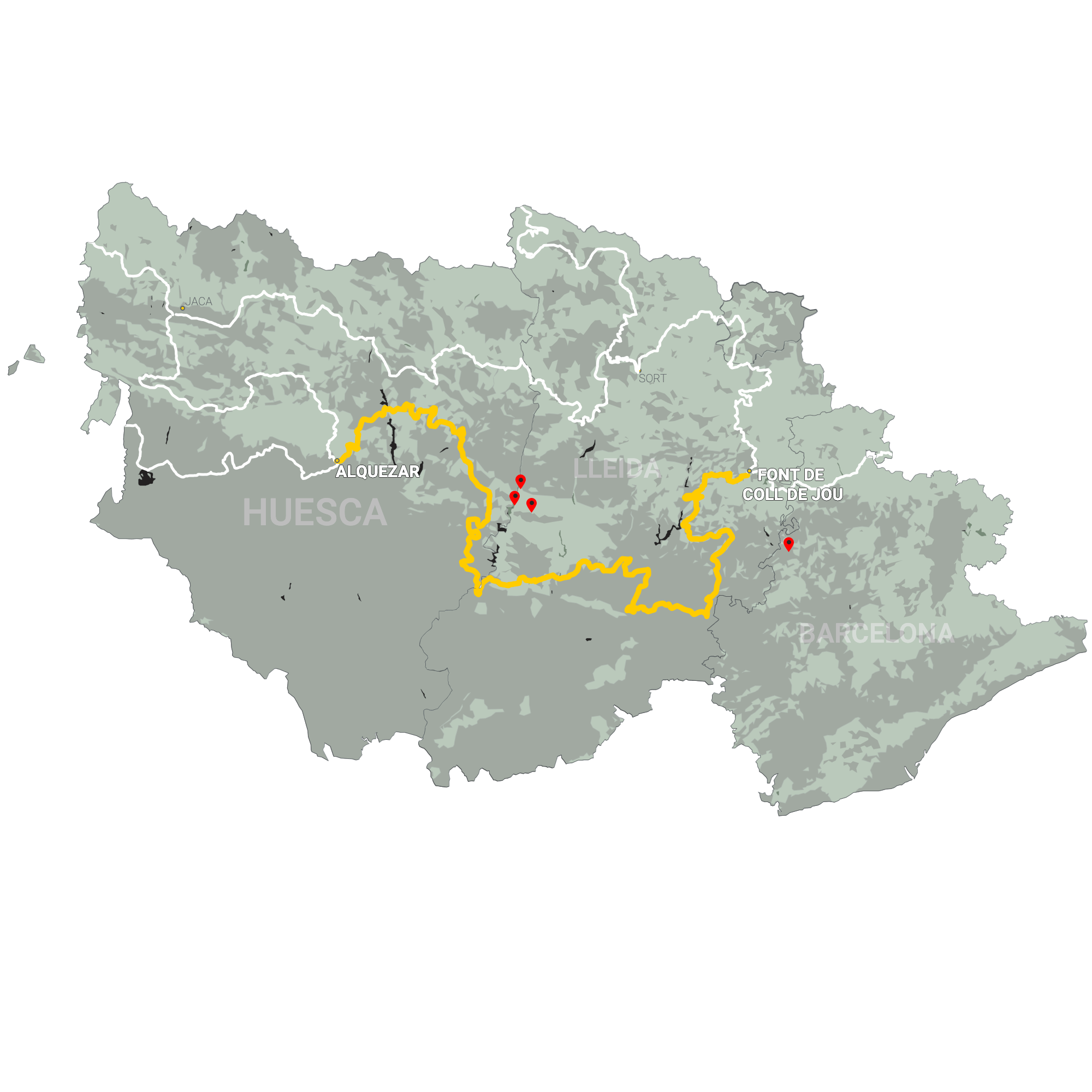 With the high Pyrenees at the horizon, you start your off-road adventure in the semi-arid region of Catalonia and Aragon. From Font de Colle de Jou, you embark eastwards for a 30-kilometer on-road section to the lower hills around Oliana. With the Oliana reservoir to your side and an overview of the Pantà de Rialb reservoir, your first off-road kilometers start to add up. After about 130km of traveling to the south, your route starts to turn east. Transitions between on-road and off-road sections occur regularly and you’ll probably enjoy the speed of some off-road sections. At Embalse de Santa Ana, another welcoming reservoir in the landscape of northern-Spain, you cross the border into the province of Aragon. It’s here where you encounter the most beautiful 60 kilometers of off-road sections of this route. With one section of almost 40km of non-stop off-road, it’s here where you become a real adventuriser! You finally end your GLR 23 adventure after 446km in Alquezar, where you have again multiple options to continue your northern-Spain adventure.
see connections 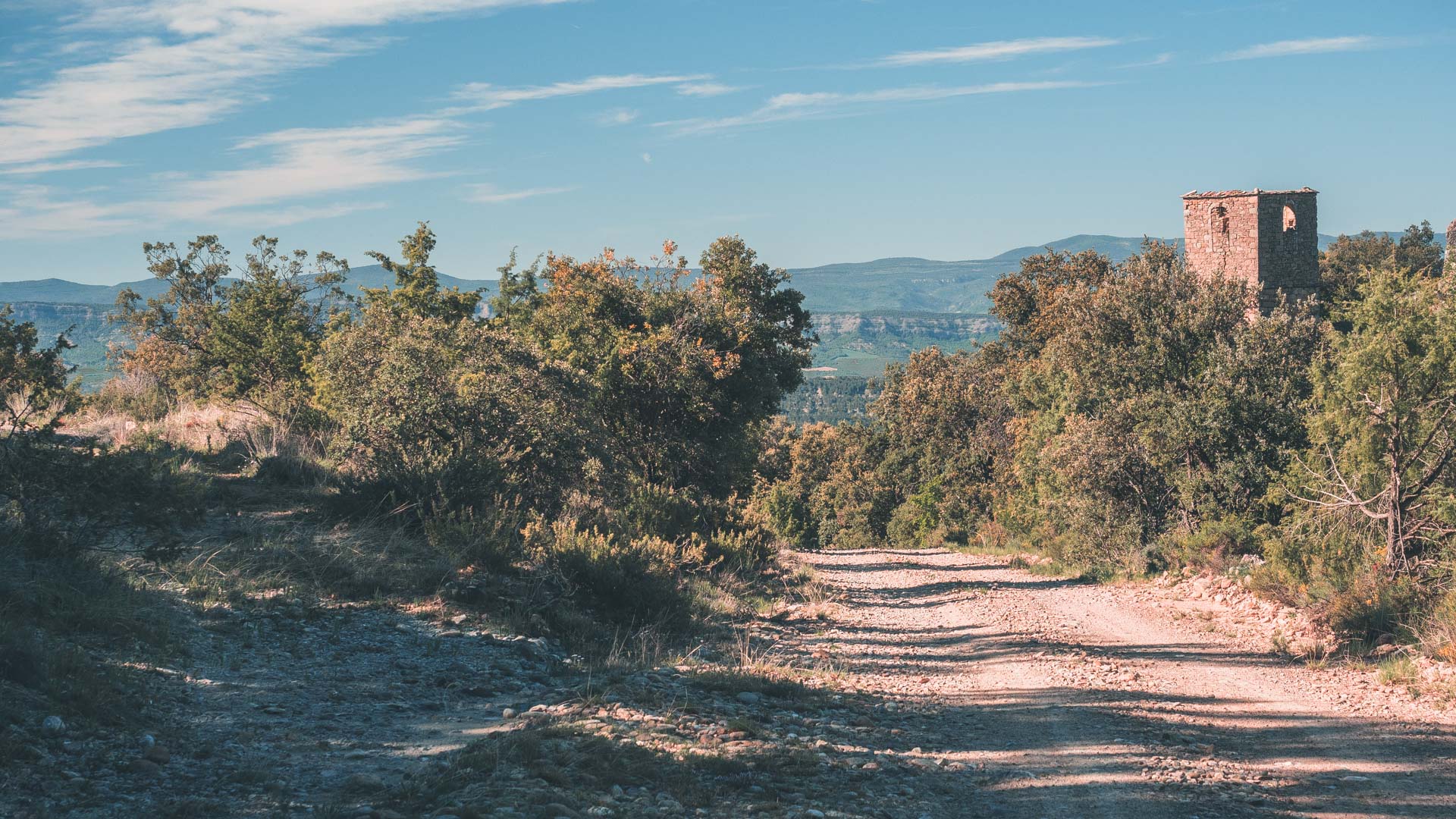 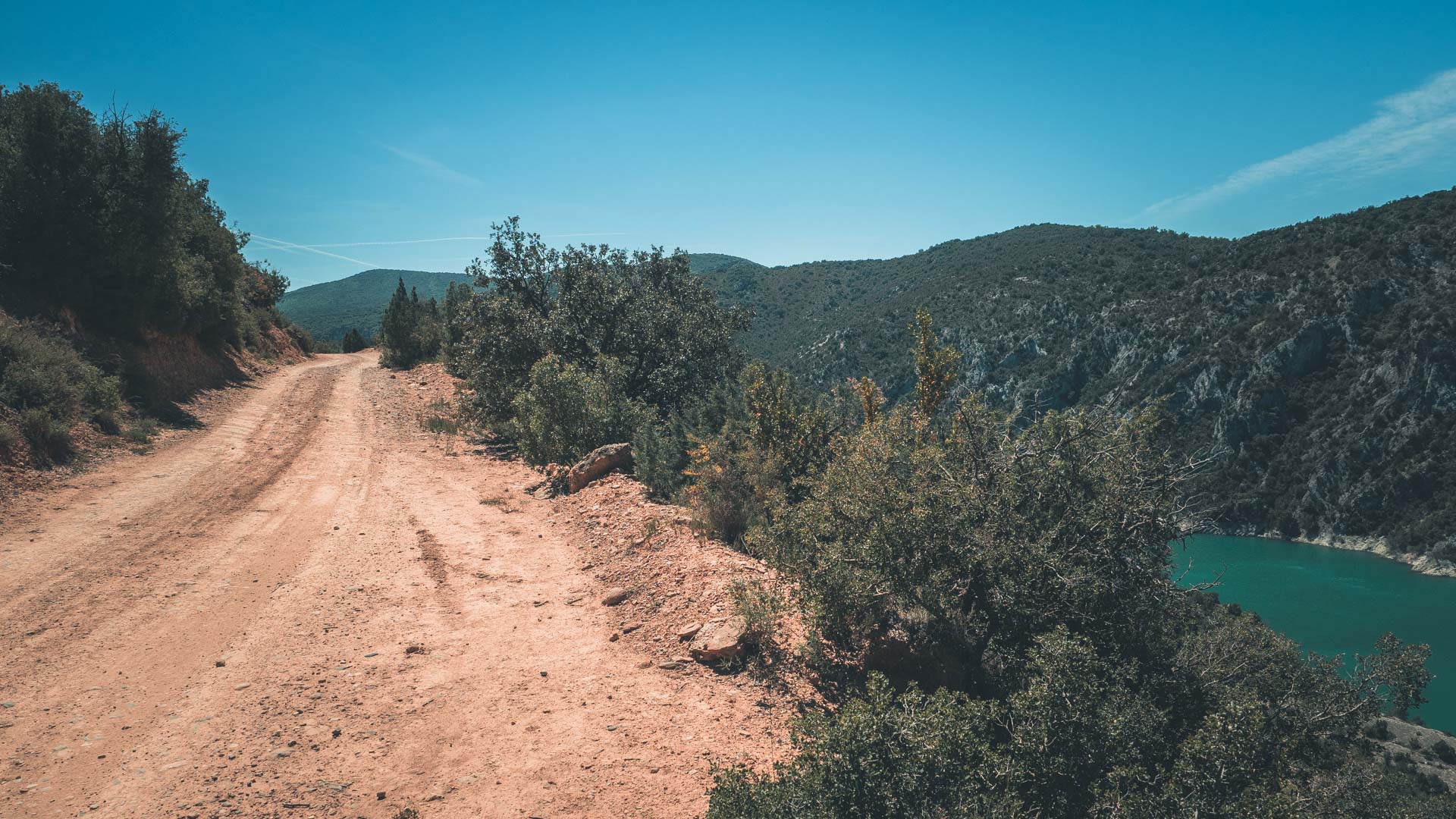 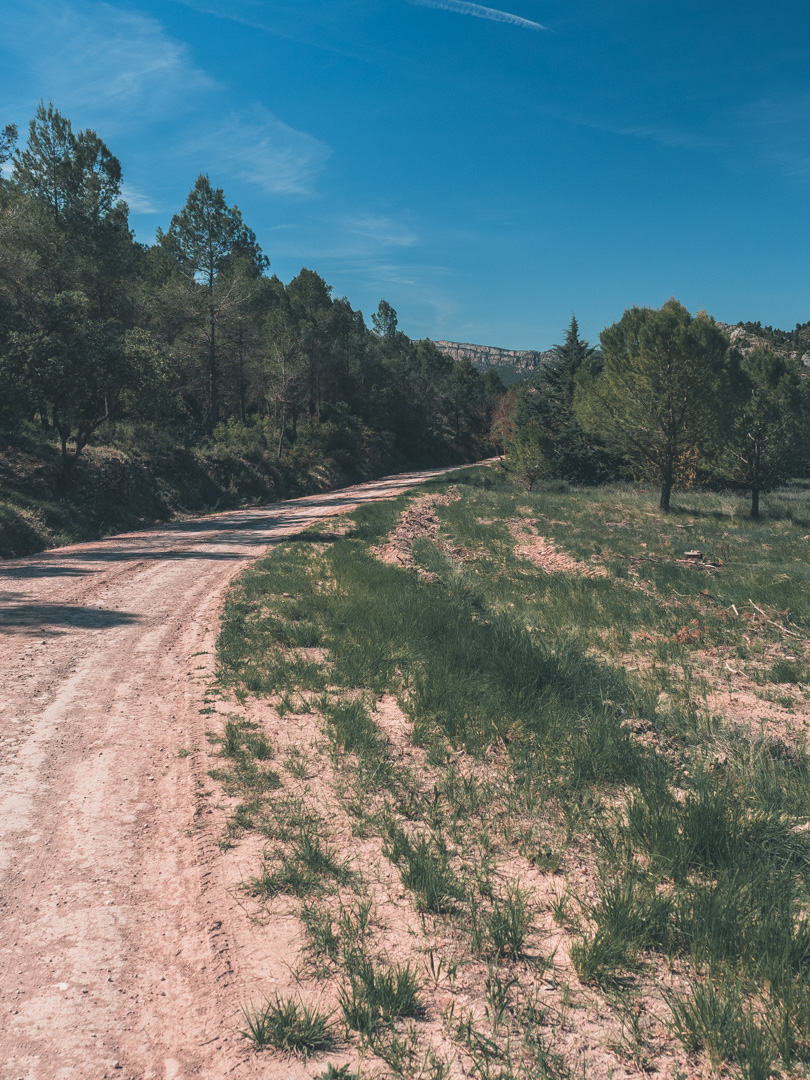 The GLR 23 crosses the Pre-Pyrenees in the north of Spain. The route traverses the provinces of Lleida and Huesca from east to west. Read all about the region down below!

In the north-east of Spain, you find the province of Lleida. As it’s located in the west of the autonomous region of Catalonia, it’s often referred to as the “west”. The capital, which carries the same name, houses 30% of the population. With the Pyrenees to the north, it’s especially an upcoming destination for adventure tourists. In the north, you also find Catalonia’s only National Park: Aigüestortes i Estany de Sant Maurici National Park. As this may be a beautiful area to explore on foot, for us as motorcycle riders it’s a little more difficult to find the trails we long to. A little more to the south, in the Pre-Pyrenees, lots of mountain trails lead us through the hills. Due to its alpine climate, it can be quite chilly in spring, so expect the occasional snowdrift when planning your ride. If we progress even more to the south, we find the central plains of Lleida. Freedom becomes a new expression in this area. Here you’re able to ride amongst the fields, meadows and century-old olive groves. With its inland climate, the summer can be hot. The many gorges and little lakes provide you with occasional refreshments. Besides the abundance of natural features, Lleida has also a rich Romanesque heritage. You’ll encounter many ruins while exploring the backcountry. One of its main features is the churches of the Vall de Boi, which have been declared part of the UNESCO World Heritage Site. 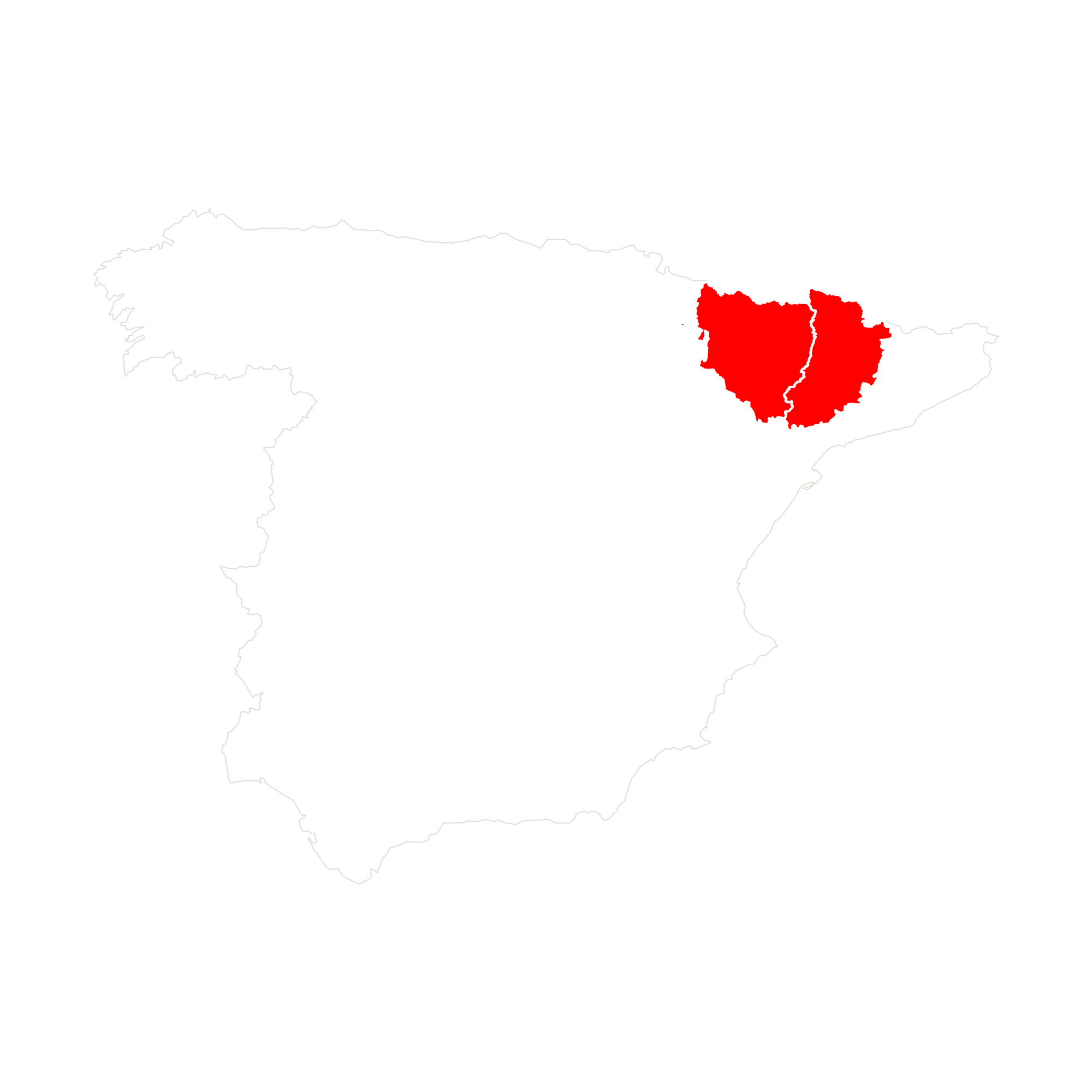 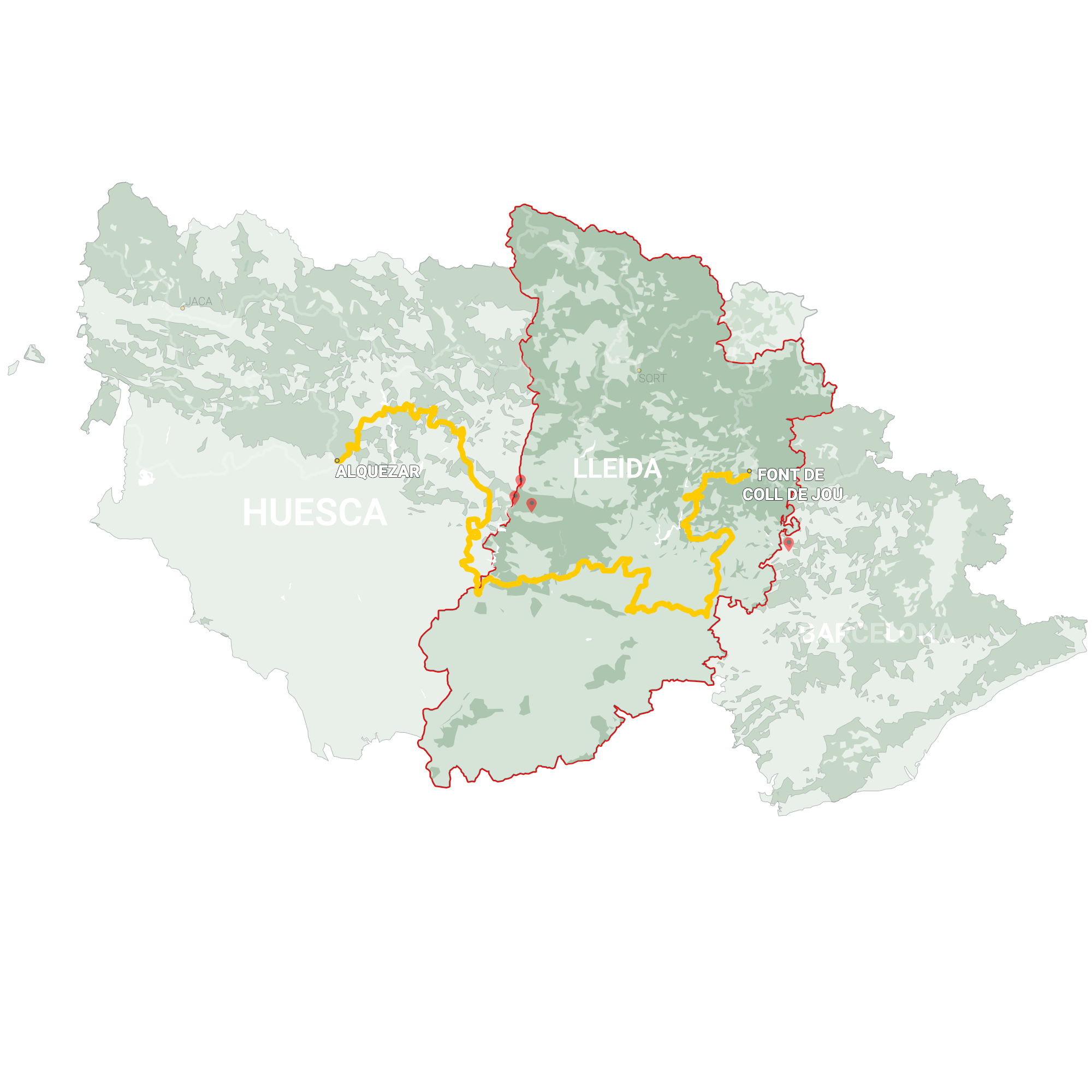 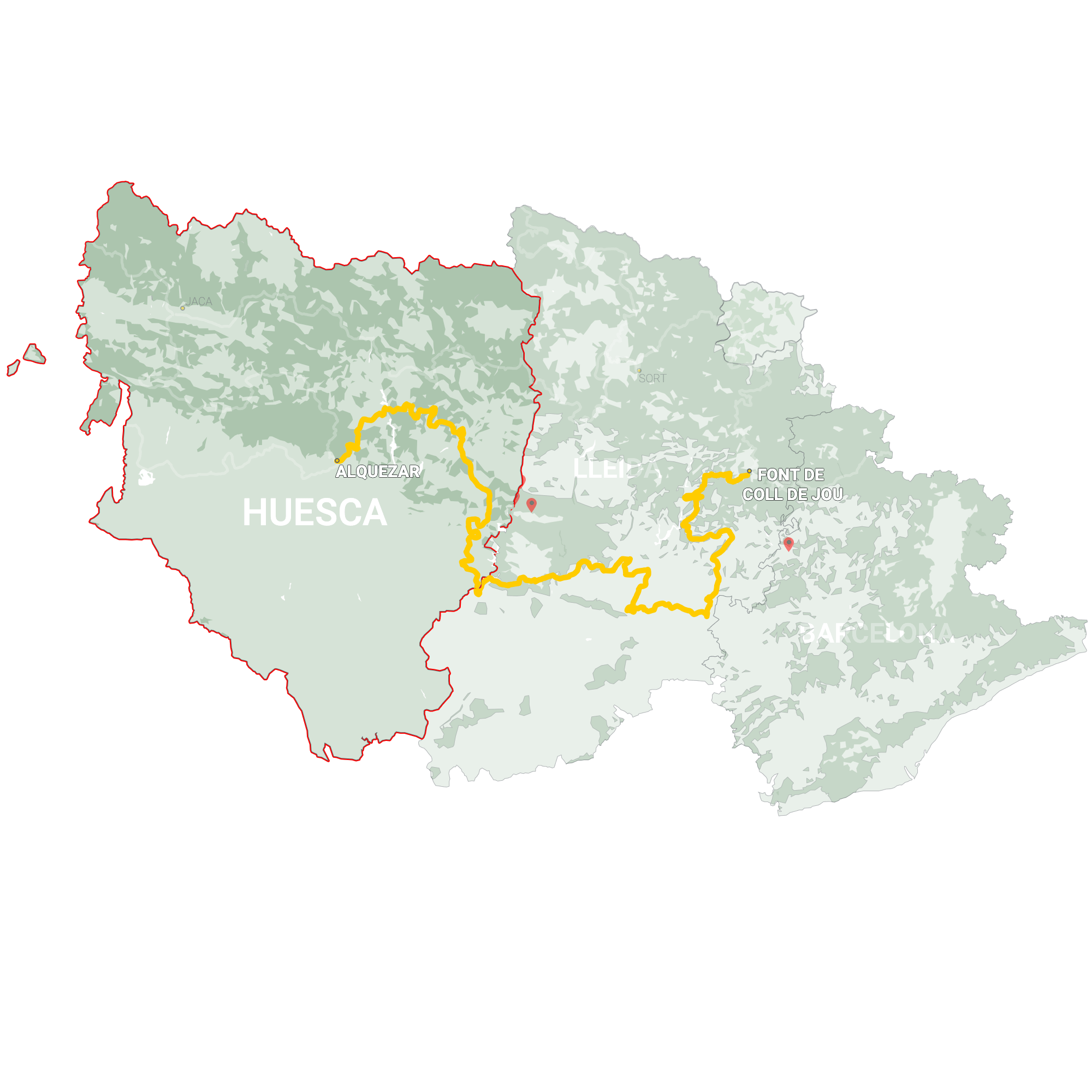 Adventurising isn’t only about getting as fast from A to B! A Region has so much more to offer! That’s why I give you some suggestions about things to do while Adventurising the GLR 23.

If you love science as much as I do, this astronomical observatory is worth visiting. The remoteness of the region and the lack of light pollution makes this the perfect place to gaze at the sky!
more info

Leave your bike behind for a hot day and get into a kayak to discover the beautiful gorges of Mont-rebei. The color of the water is an astounding dark blue. Besides some adventurous activities near and around the gorges, it’s also possible to just take a quick refreshing dive.
more info

It’s not just the chapel that makes it worth visiting, it’s the location! Build on a sharp ridge, this chapel stands proud over the region! A nice 20 minutes hike will make this visit worthwhile.
more info 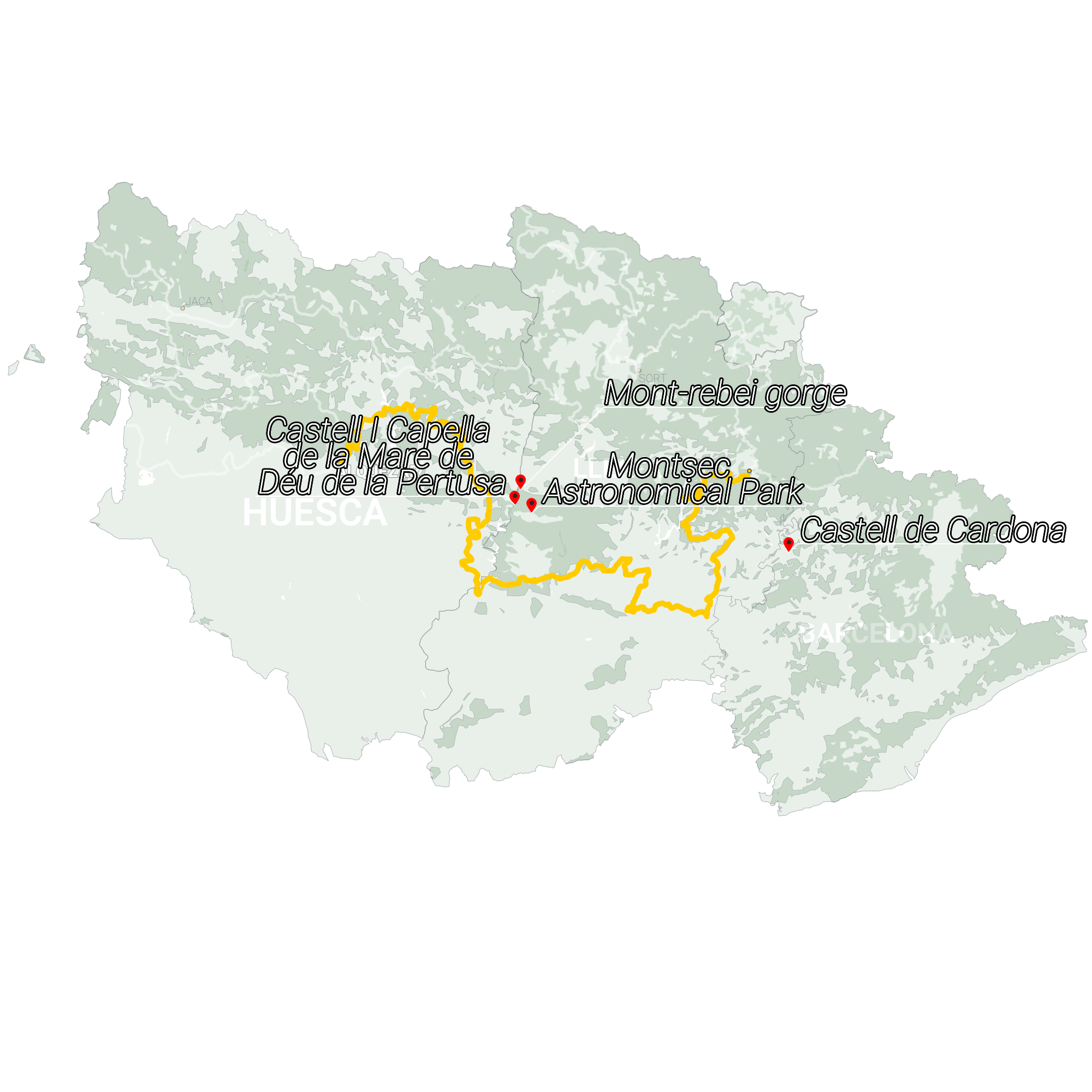 Thank you for downloading the GLR 23! Good luck with Adventurising Europe. Speaking of Adventurising Europe, to keep the project going and free, we’re relying on a mix of sponsored advertisements and Adventuriser donations. Do you like what we’re doing and you want to support the project? Please consider a donation. You can read more about donations and support here.

Continue your GLR 23 Adventure by connecting different GLRs. To make your life even simpler, I’ve put together all the options down below!

You’re in Font de Colle de Jou and you want to continue your motorcycle adventure? Great, because I have two connecting GLRs for you. First, the GLR 16 will lead you further east. This 342-kilometer long GLR will hop the border with France in its last few kilometers. With a total of 113 km of off-road sections, this is an adventure worthy GLR.

On the other hand, you can choose the GLR 17. This GLR is the only route crossing Andorra. This 216-kilometer long GLR will guide you over the infamous Smugglers Pass back into Spain. Be aware of the season. Snowdrifts early in spring and summer will block your passage at altitude! With 87 km of off-road sections through the Pyrenees, you won’t be disappointed. 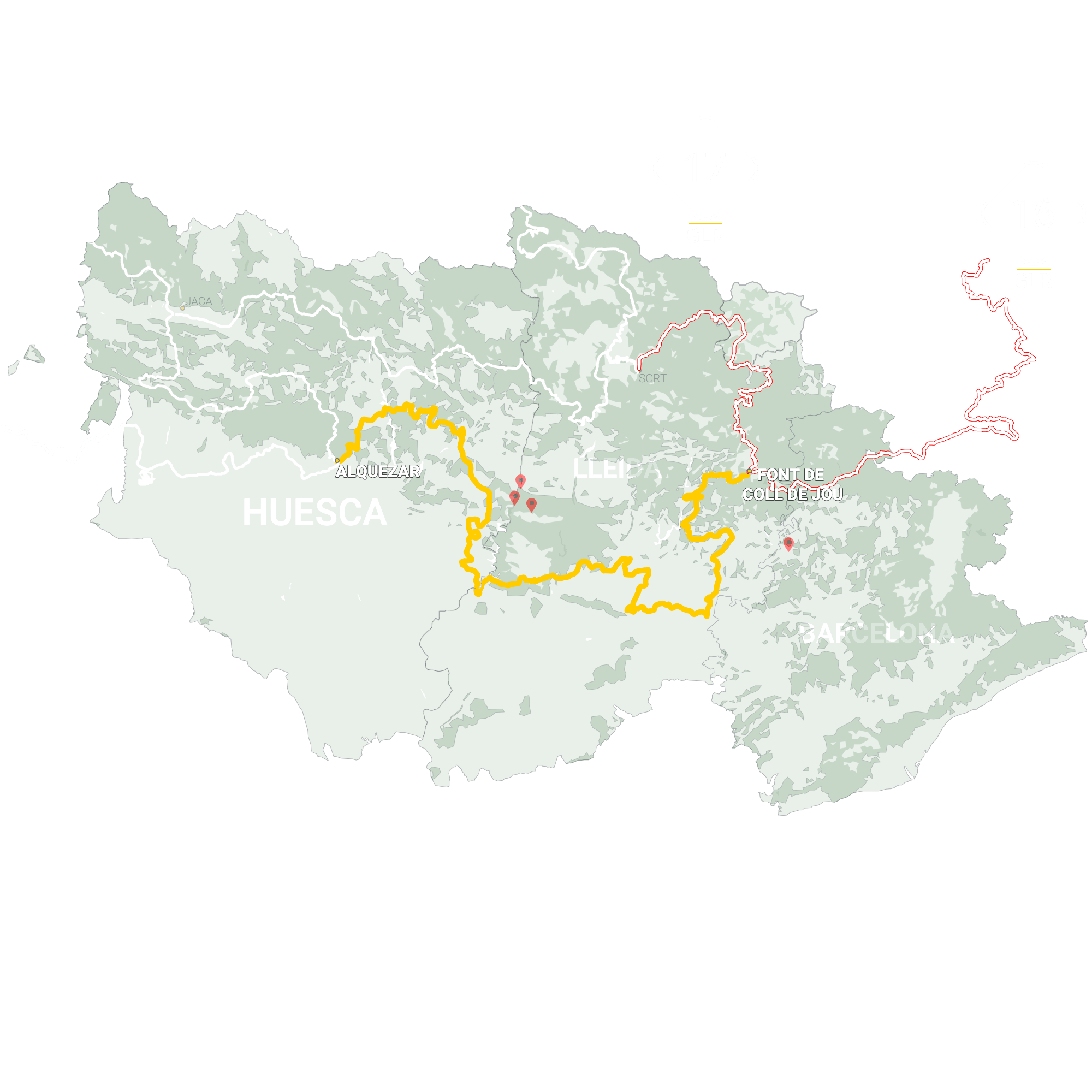 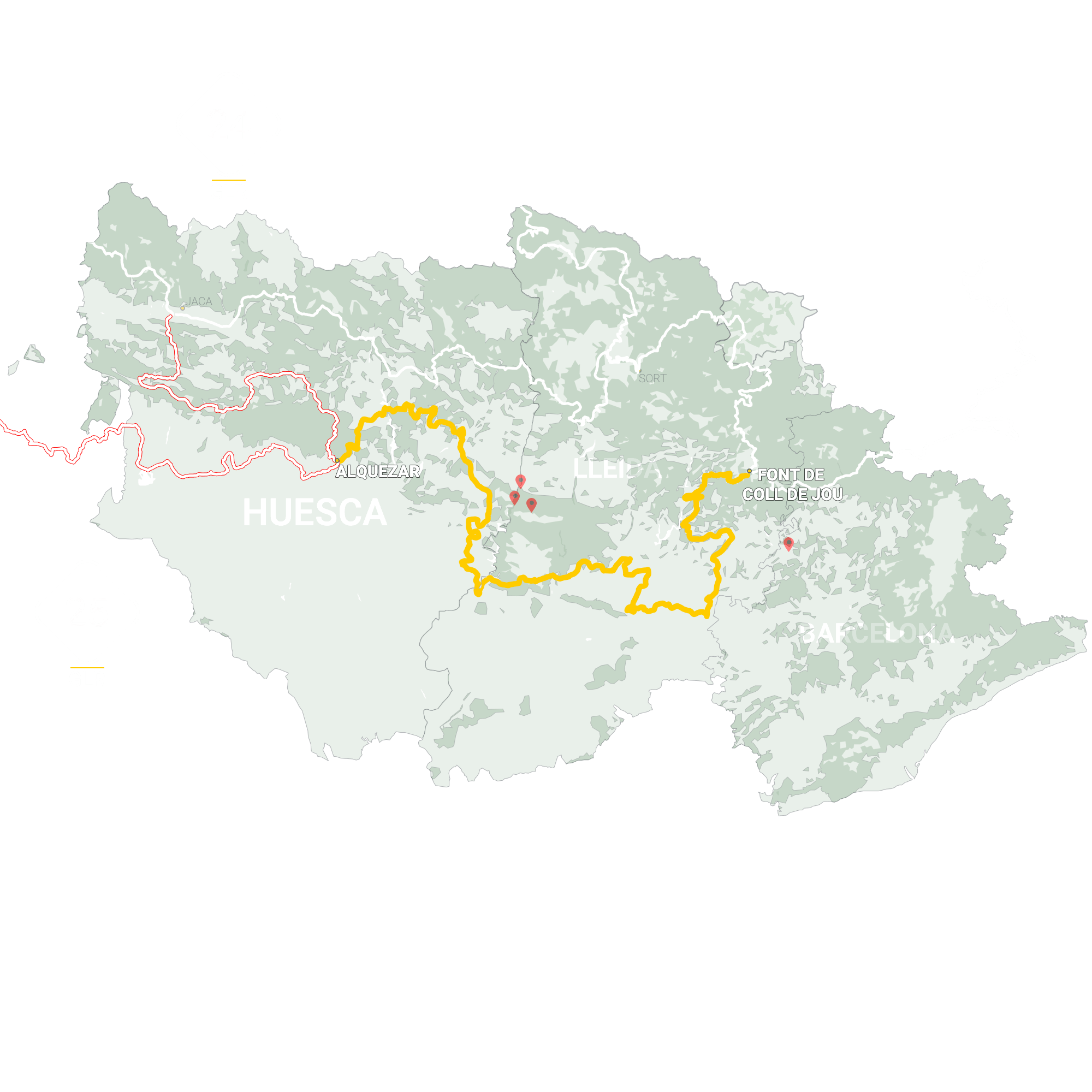 In Alquezar you have again two options to continue your motorcycle adventure. Take the GLR 24 directly up north. This motorcycle route will lead you for over 182 kilometers to its destination in Jaca. With a little less than 39 kilometers of off-road sections, it shows you the great interior of Northern Spain.

If you aren’t ready to go straight up north, take the GLR 25. This route loops around to the west, before turning up North. This GLR is one of my personal favorites with an overall length of 659 kilometers. With more than half of the total distance in off-road sections, this is a real adventurous motorcycle route! 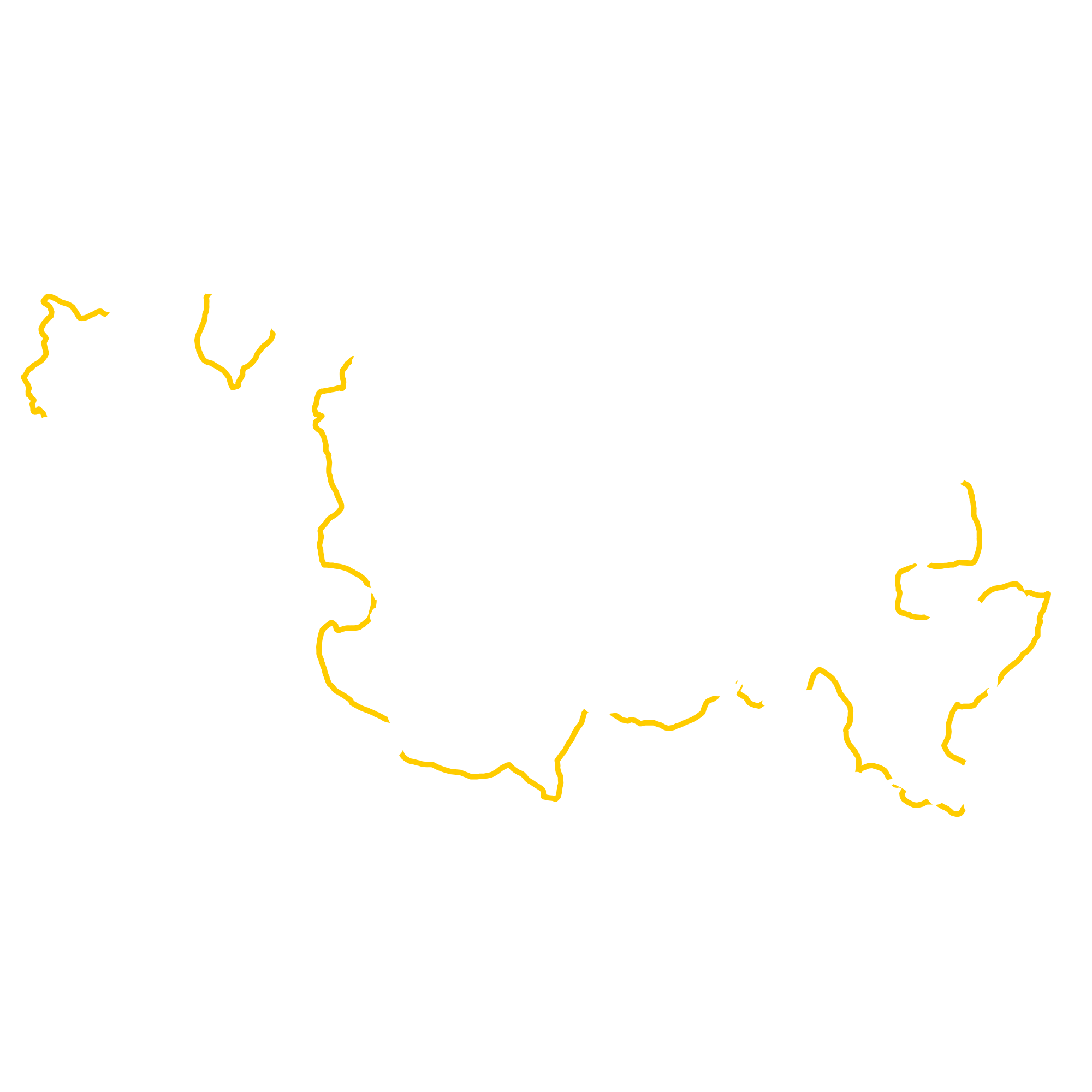 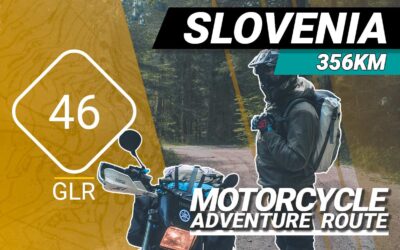 The GLR 46 motorcycle adventure route leads you for over 356 kilometers through the Upper- and Inner Carniola regions of Slovenia. 77.5 of those kilometers will traverse over off-road sections. If the going gets tough, The Back-up Tracks will support you with 8 different sections. With a total of 4 connecting GLRs to this GLR 46, you’re able to continue to Adventurise the region. Let’s get going! 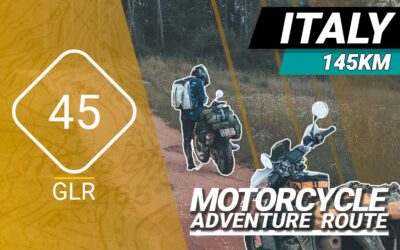 The GLR 45 motorcycle adventure route leads you for over 145 kilometers through the Friuli Venezia Giulia region of Northern Italy and the Nova Gorica province of Slovenia. 26.4 of those kilometers will traverse over off-road sections. If the going gets tough, The Back-up Tracks will support you with 6 different sections. With a total of 5 connecting GLRs to this GLR 45, you’re able to continue to Adventurise the region. Let’s get going! 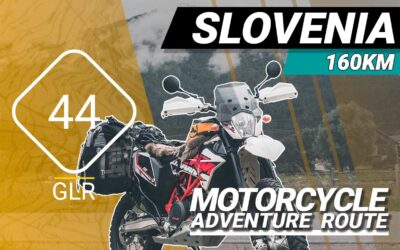 The GLR 44 motorcycle adventure route leads you for over 160 kilometers through the Carinthia region of Austria, Friuli Venezia Giulia region of Italy, and the regions of Tolmin and Nova Gorica in Slovenia. 2.7 of those kilometers will traverse over off-road sections. If the going gets tough, The Back-up Tracks will support you with 2 different sections. With a total of 5 connecting GLRs to this GLR 44, you’re able to continue to Adventurise the region. Let’s get going!