The GLR 38 explores the eastern region of the Dolomites. 317 Kilometers of motorcycle adventure in Northern Italy! Don’t wait and adventurise this GLR!

The GLR 38 motorcycle adventure route leads you for over 317 kilometers through the Trentino-South Tyrol and Veneto regions of Northern Italy. With a total of 4 connecting GLRs to this GLR 38, you’re able to continue to Adventurise the region. Let’s get going!

The GLR 38 is an Novice route and can be ridden by any adventure rider. More information about the GLR Route Gradings System. 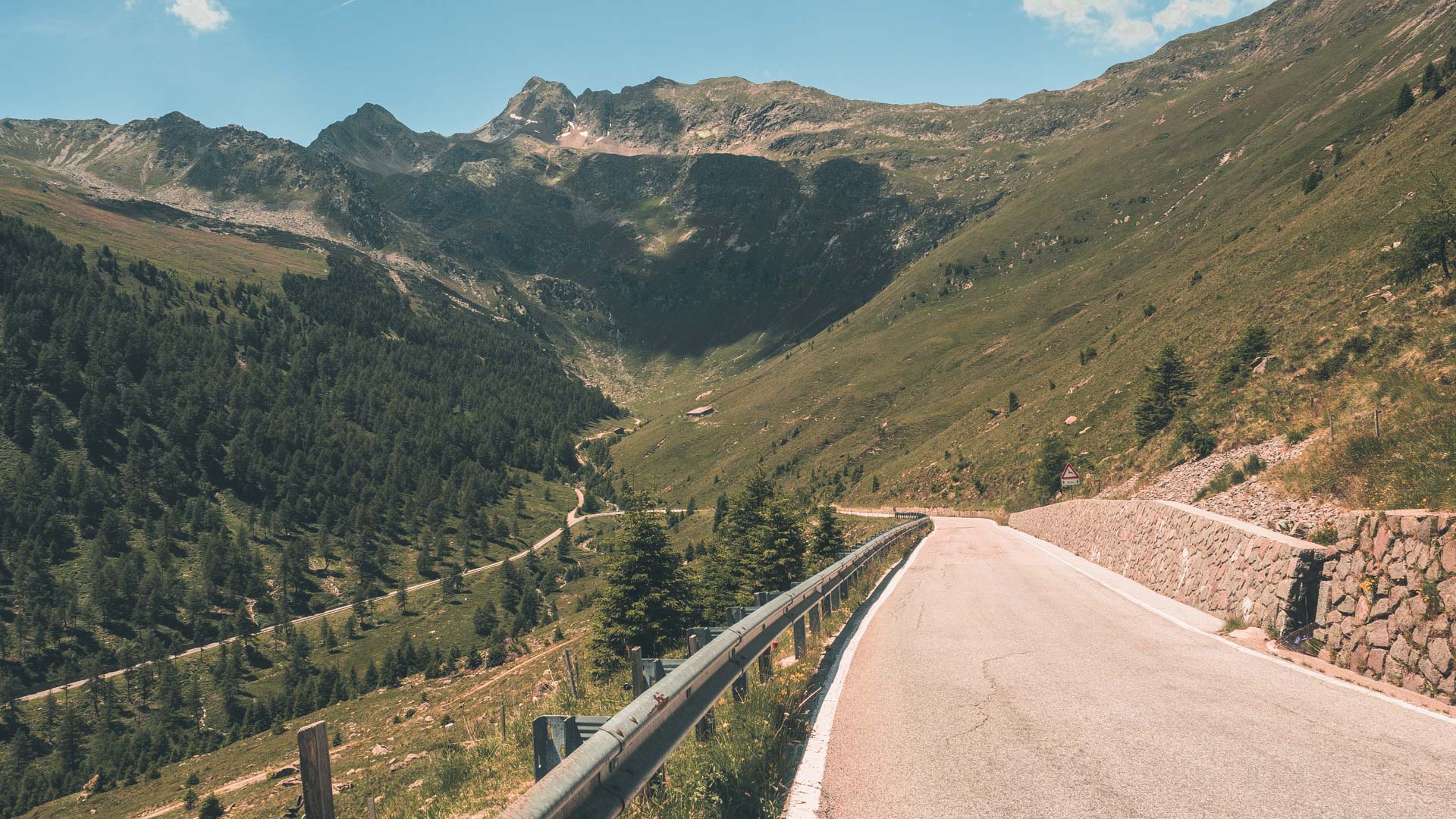 At the centre of Adventure Tourism lies Canazei. It’s here where you start your GLR 38 motorcycle adventure through the Dolomites. This 317-kilometer adventure route will explore the adventurous landscapes of Northern Italy. Let’s start with a warm-up of 8 hairpin turns within the first 300 meters. If you’re warmed up by now, you’ll follow the SS242 up north. Right in front of you is the giant massive of the Sella Towers. You won’t be disappointed by the spectacular view. Especially if you’re able to be here around sunrise. At Plan De Gralba, the SS242 turns west. For over 13 kilometers, this road leads you past some iconic Dolomite villages like Selva di Val Gardena and Santa Cristina Valgardena. Be aware of the speed limit here, because the fines are hefty! I know this through personal experience. 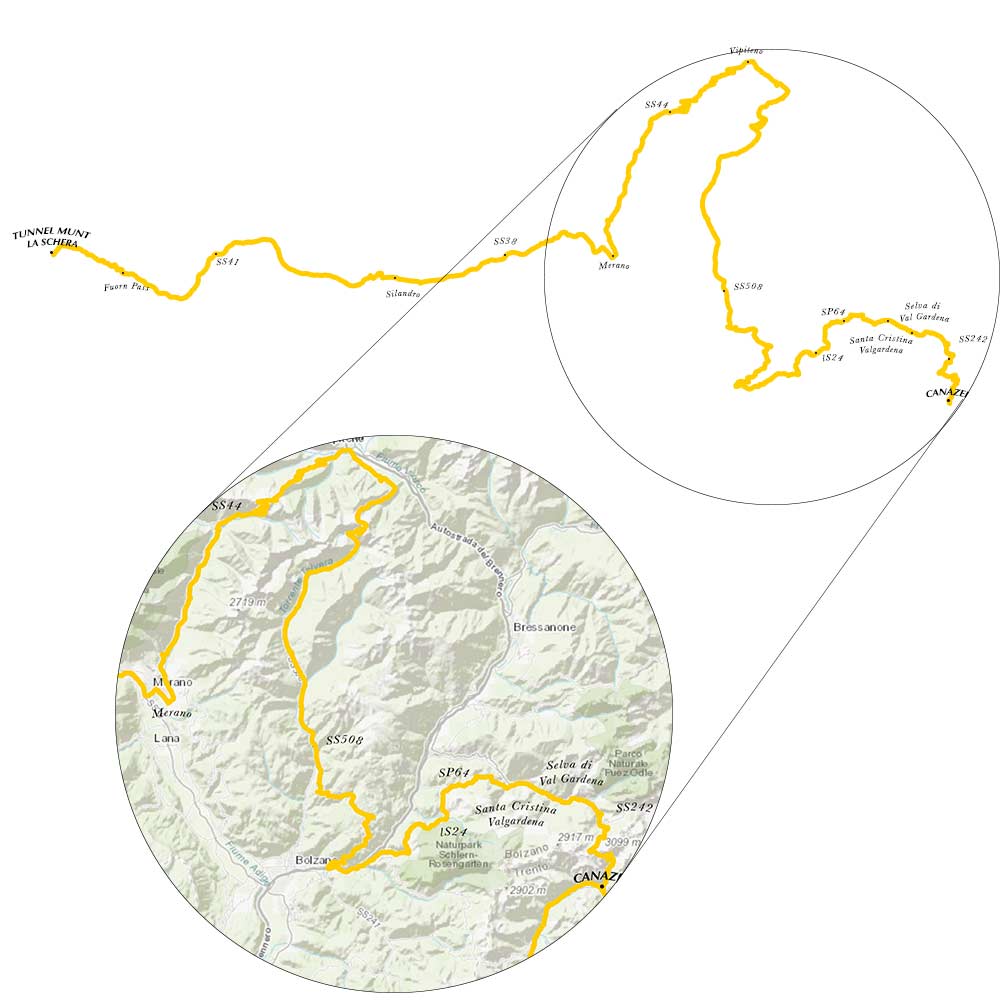 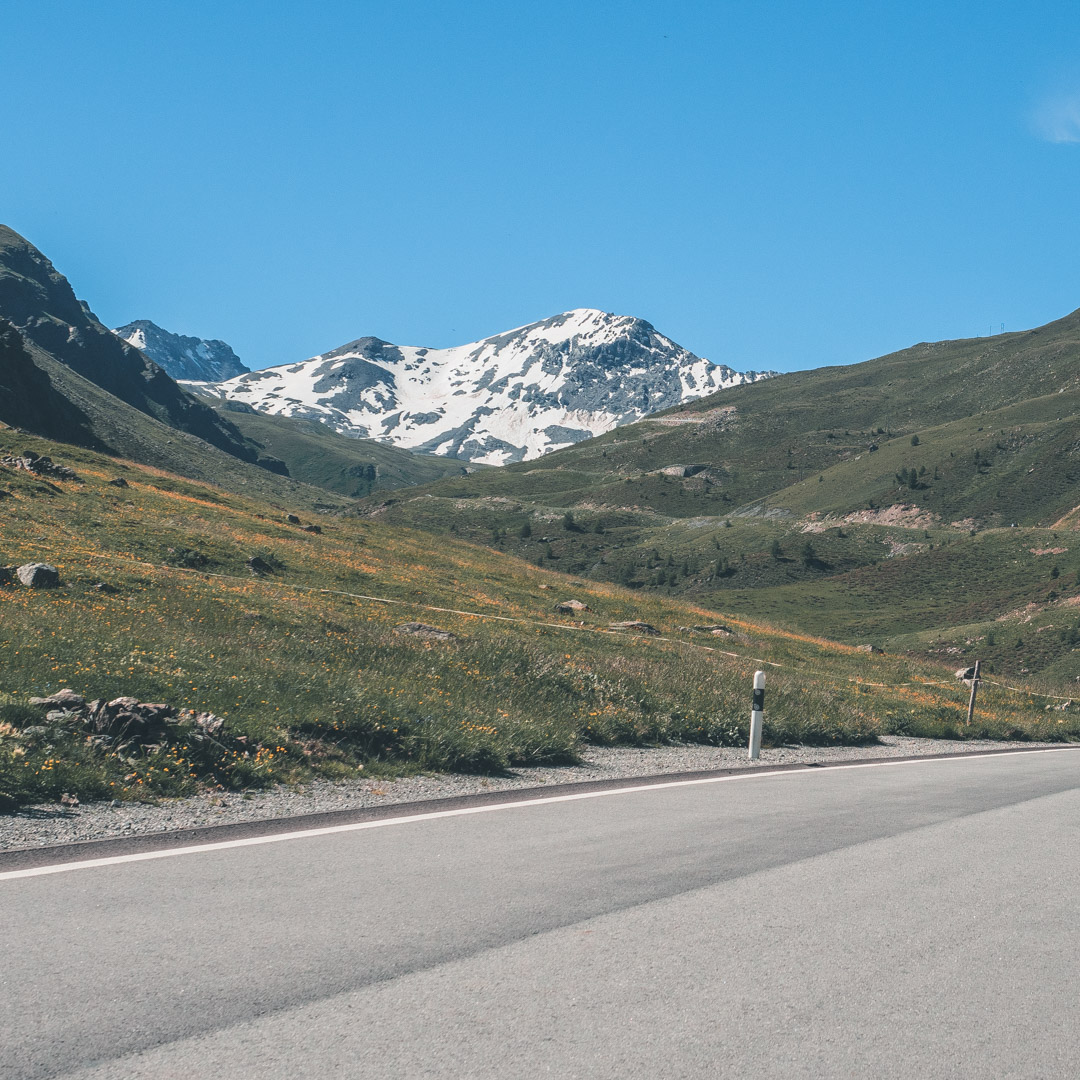 After passing these villages, you make a turn for the south at Guggenoi-Digon. Here, you follow the SP64 up the mountain. This road flows over into the LS24 at Telfen-Lanzin. With the spectacular view of the Schlern-Rosengarten Nature Park right in front of you, you follow this back-road until you reach St. Justina. Located at the city limits of Bolzano, this small village hides a road up the mountain to give you a spectacular view of the city itself. This backroad flows over into the SP135 and leads you for over 14 kilometers through the rolling hills surrounding Bolzano. Are you fueled up? Because the SS508 is going to be the only road through the valley for over 51 kilometers. With some iconic mountain peaks to your side like Ifinger in the Sarntal Alps, Penser Weißhorn, and Tagewaldhorn, this isn’t going to be a boring ride. At the Northernmost point of this motorcycle route in Vipiteno, you make a turn for the south. Follow the SS44. This road is located between the Sarntal Alps and the Texelgruppe Nature Park. After 55 kilometers, you’ll end up at Merano. It’s here where the last stretch of the GLR 38 directs you to the east.

The SS38 leads you through the valley. It’s at Sluderno where you take the SS41 to cross the border into Switzerland. These last few kilometers are still a tread! Explore the Val Müstair Biosphere on your own terms. End the GLR 38 with the Fuorn Pass.

After 317 kilometers, you’ll end your GLR 38 motorcycle adventure at Tunnel Munt La Schera. Be aware, if you want to continue your journey back into Italy, you’ll need to pay a small fee to cross the Tunnel. For the most recent prices and opening hours, I’ll refer you to the official website of Tunnel Munt La Schera. 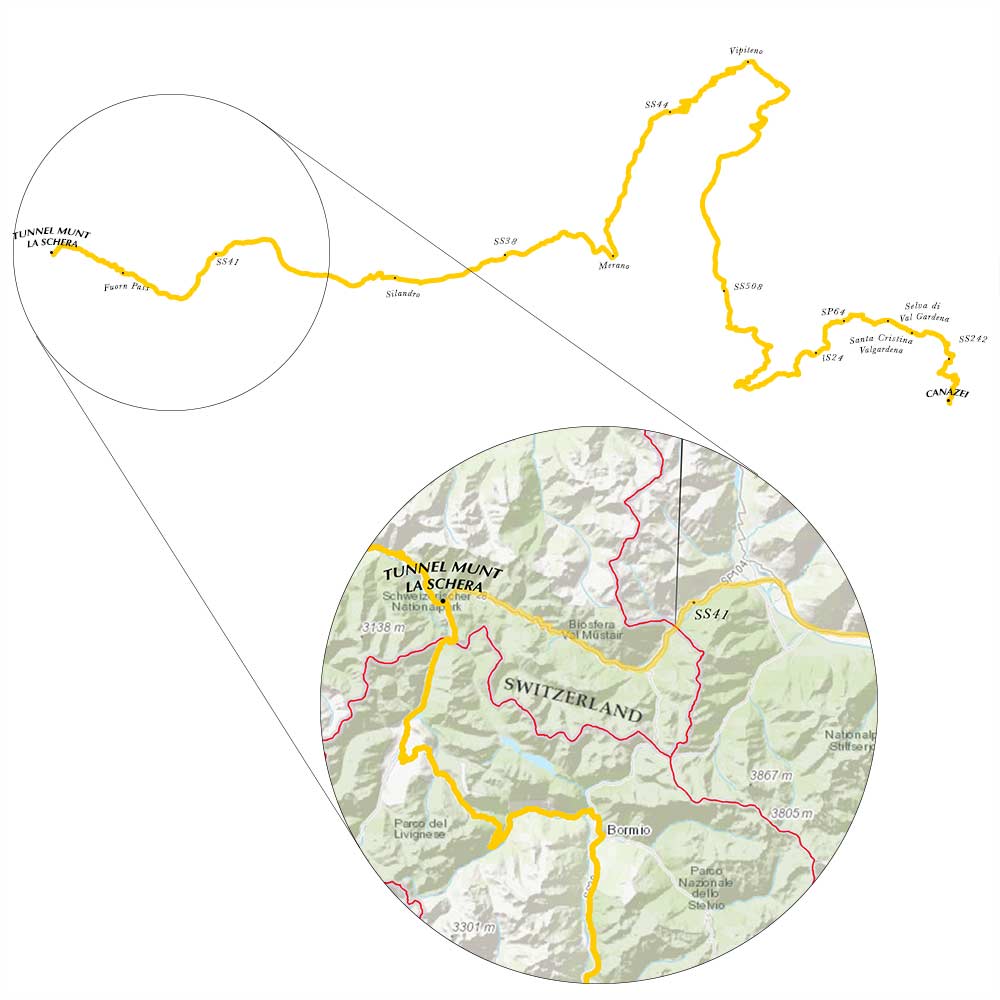 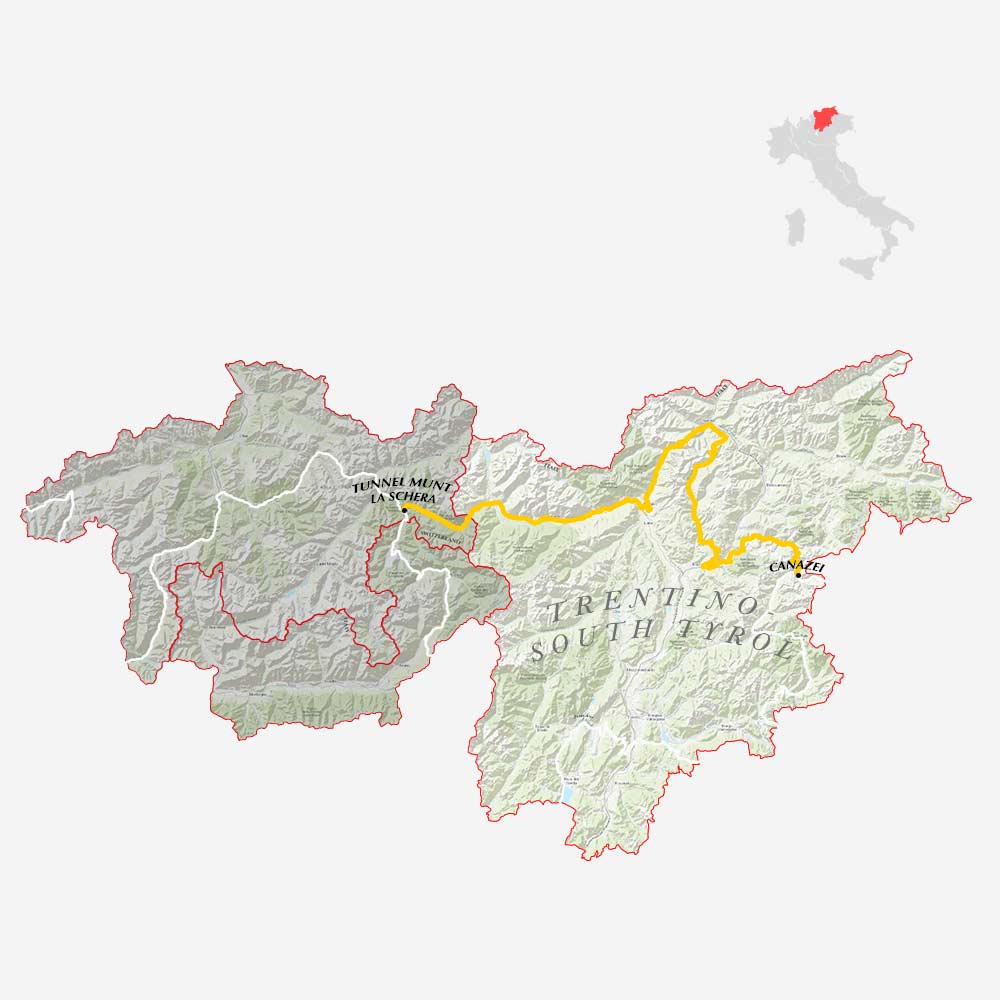 The Autonomous Region of Trentino-South Tyrol is located in the northern part of Italy. The self-governing region consists of the two provinces of Trento and Bolzano. Although, this self-governance has caused tensions over the past years after the Second World War. Nowadays, the region is known for its stable tourist industry during all seasons. This, because Trentino-South Tyrol is extremely mountainous, covering most of the southern Alps and the Dolomites. Whereas Trentino’s mountainous land is 20% over 2000m, some mountain ranges in Bolzano exceed the 3000m mark. Both provinces know large forested areas. It’s because of the mountainous terrain that the region of Trentino-South Tyrol knows both an alpine climate and a land climate, both depending on the altitude. While adventurising this region, you have to know that most of the off-road sections are off-limits. Although it knows some extraordinary trails, few of them are accessible by motorized vehicles. During the autumn, winter, and spring, snow may prevent you from exploring the small back-roads of this region. Therefore, I would recommend visiting this region between May and September. 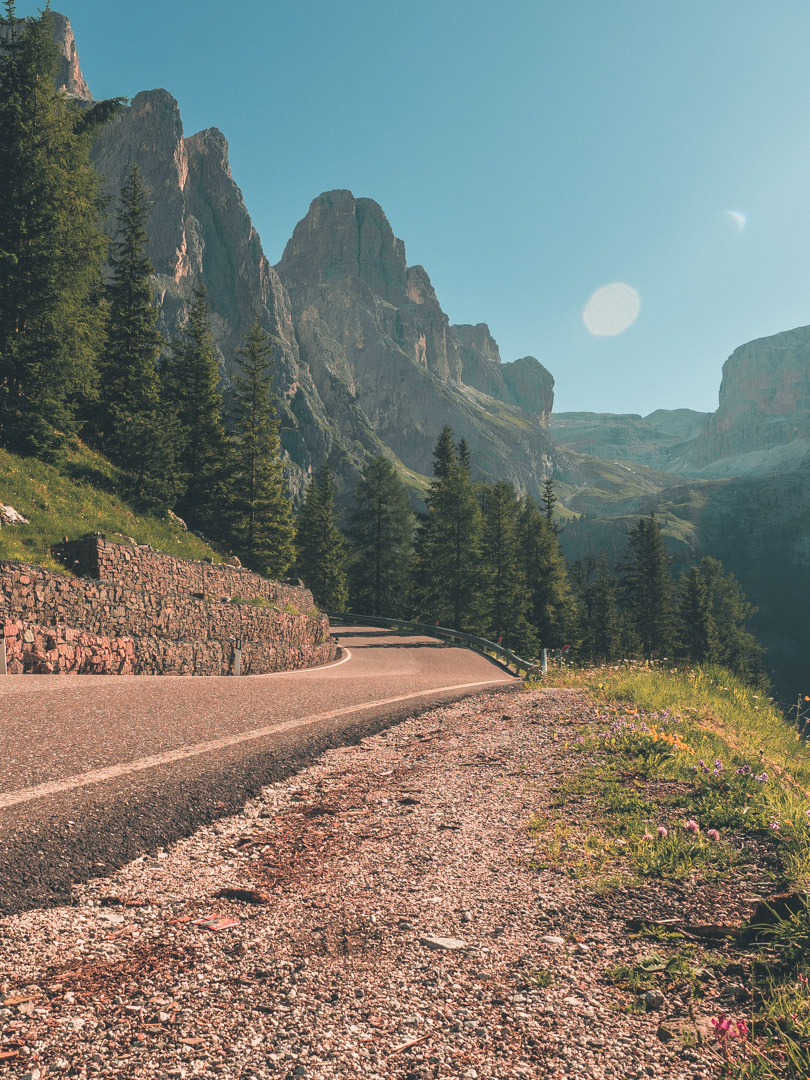 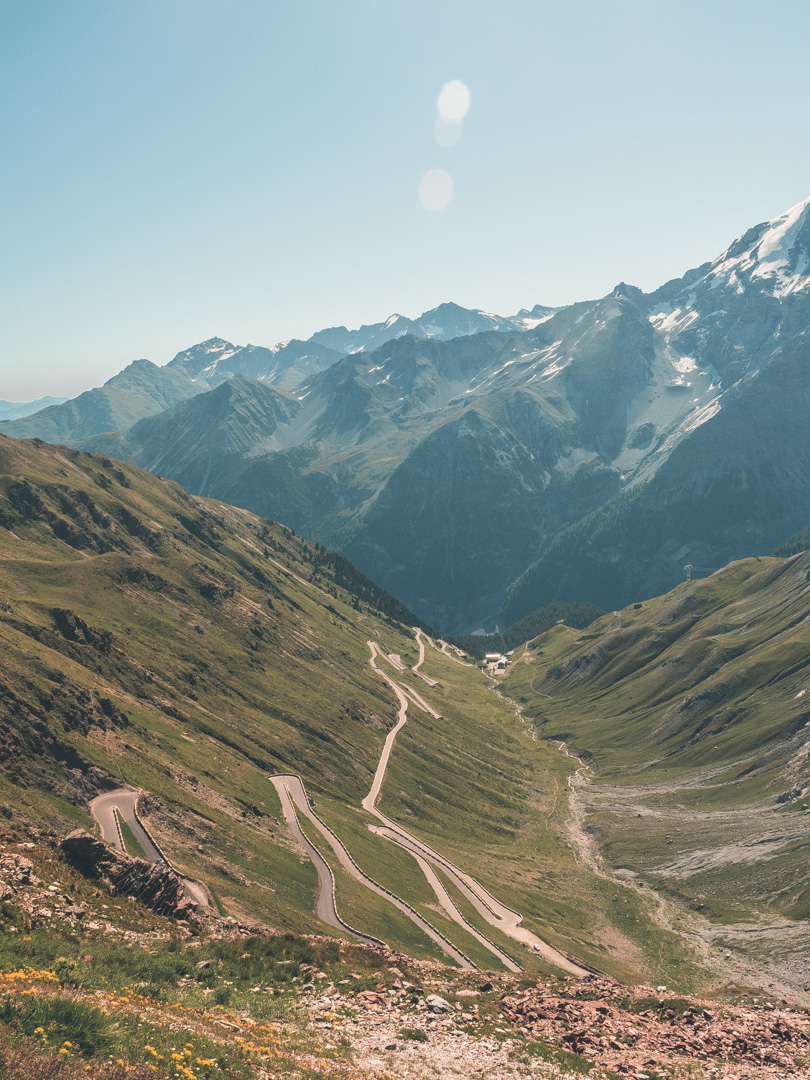 Thank you for downloading the GLR 38! Good luck with Adventurising Europe. Speaking of Adventurising Europe, to keep the project going and free, we’re relying on a mix of sponsored advertisements and Adventuriser donations. Do you like what we’re doing and you want to support the project? Please consider a donation. You can read more about donations and support here.

At the heart of the Dolomites in Canazei, you’re able to continue your journey on two different GLR adventure routes. Follow the GLR 39 down south towards Arsiè. This 144-kilometer route follows the border to the south between the Trentino-South Tyrol and Vento regions. Follow this GLR 39 when it’s still a bit too cold in the mountains. This route leads you to the warmer southern regions.

To GLR 39
Or follow the GLR 42 to the east. This 108-kilometer route is great to explore within one day. Great for a short trip to the Dolomites, also in combination with the GLR 43! Due to the higher average altitude, this GLR 42 is quite chilly during the beginning of spring and Autumn.
To GLR 42 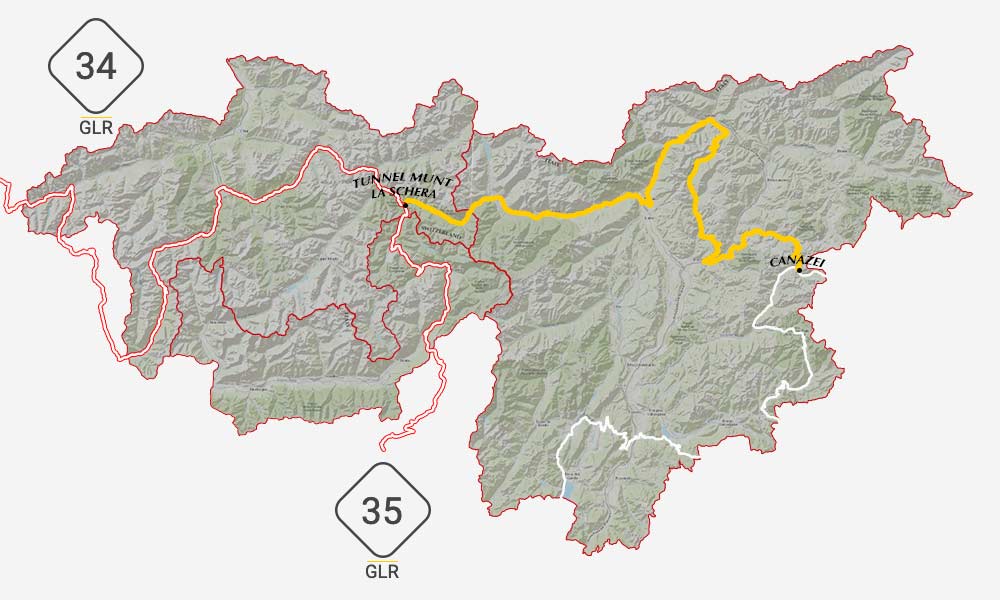