The GLR 41 motorcycle adventure route leads you for over 189 kilometers through the Veneto and Friuli Venezia Giulia regions of Northern Italy. 22.5 of those kilometers will traverse over off-road sections. If the going gets tough, The Back-up Tracks will support you with 1 section. With a total of 4 connecting GLRs to this GLR 41, you’re able to continue to Adventurise the region. Let’s get going!

The GLR 41 is a Novice route and can be ridden by any adventure rider. More information about the GLR Route Gradings System. 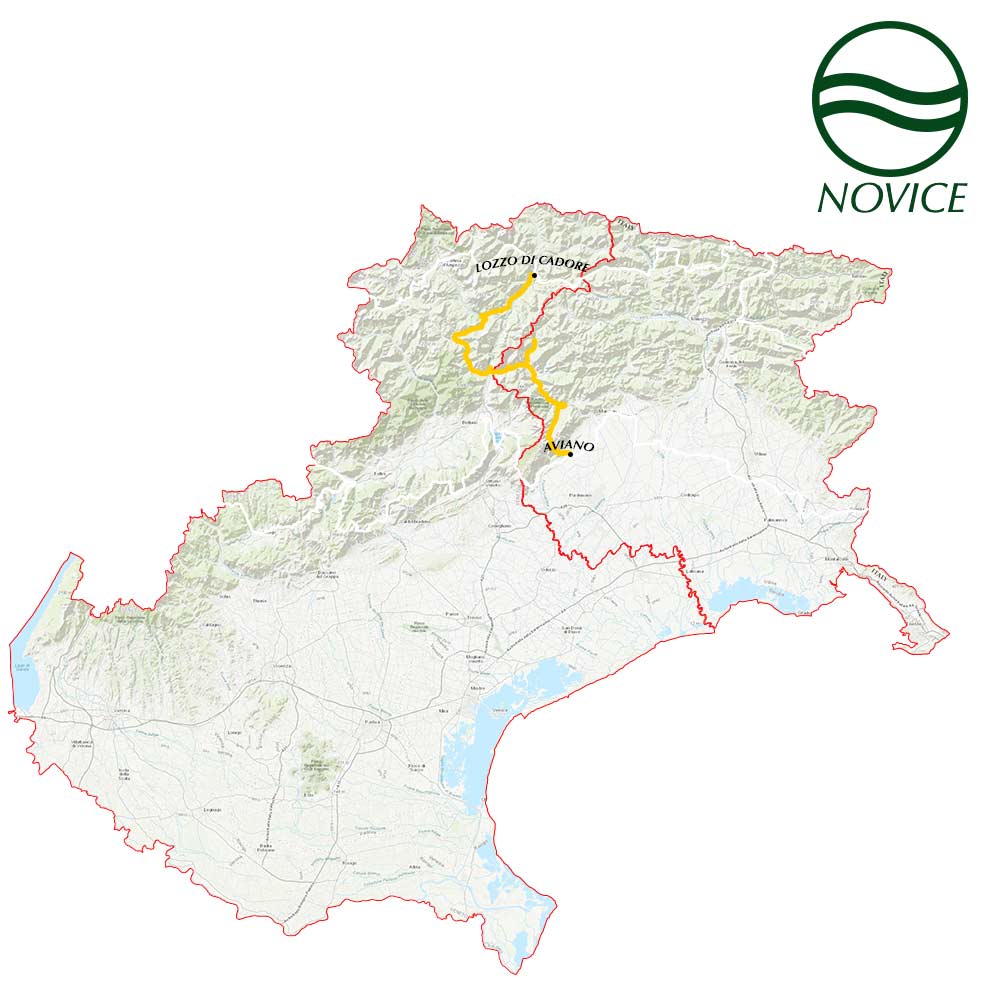 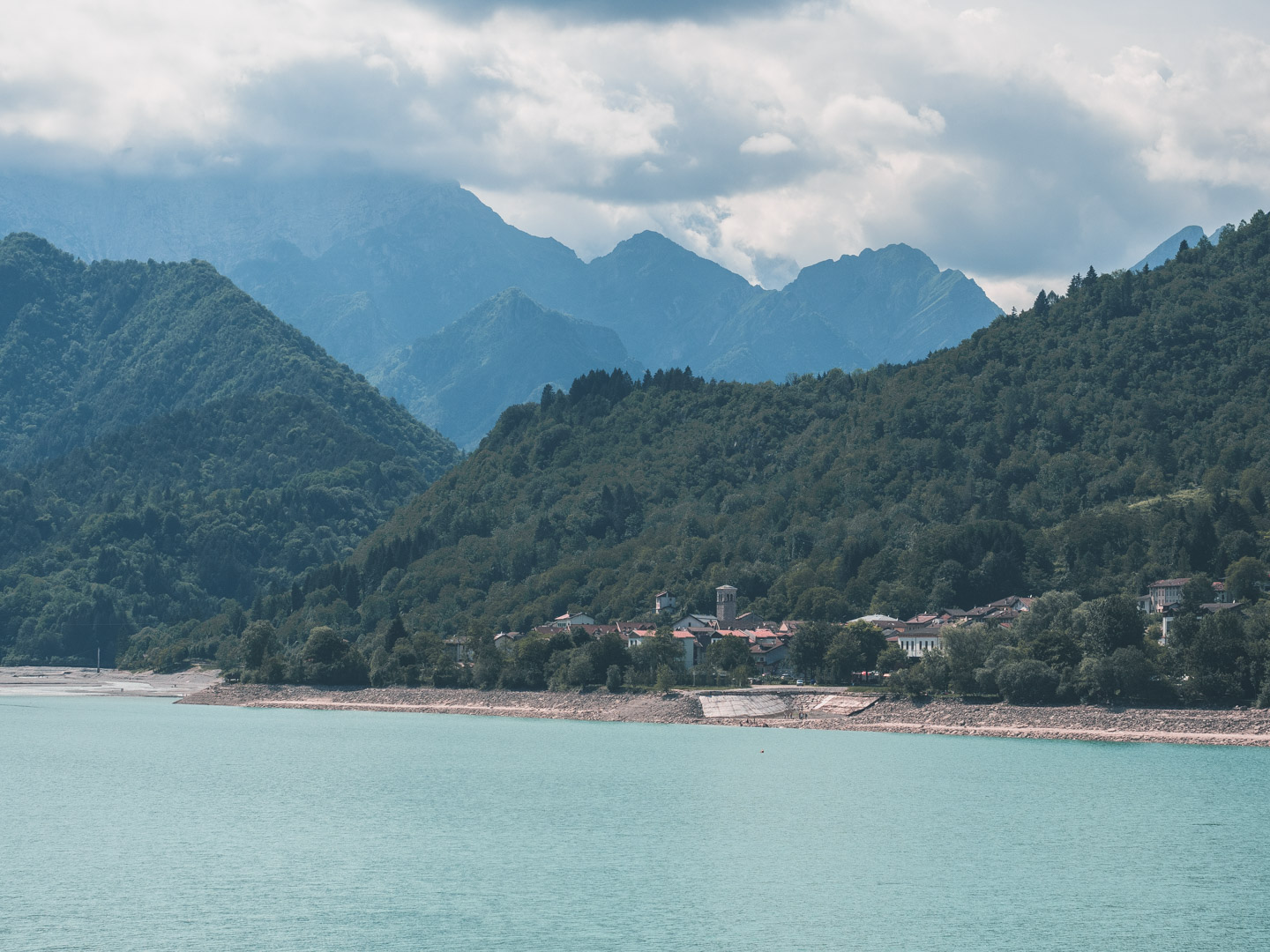 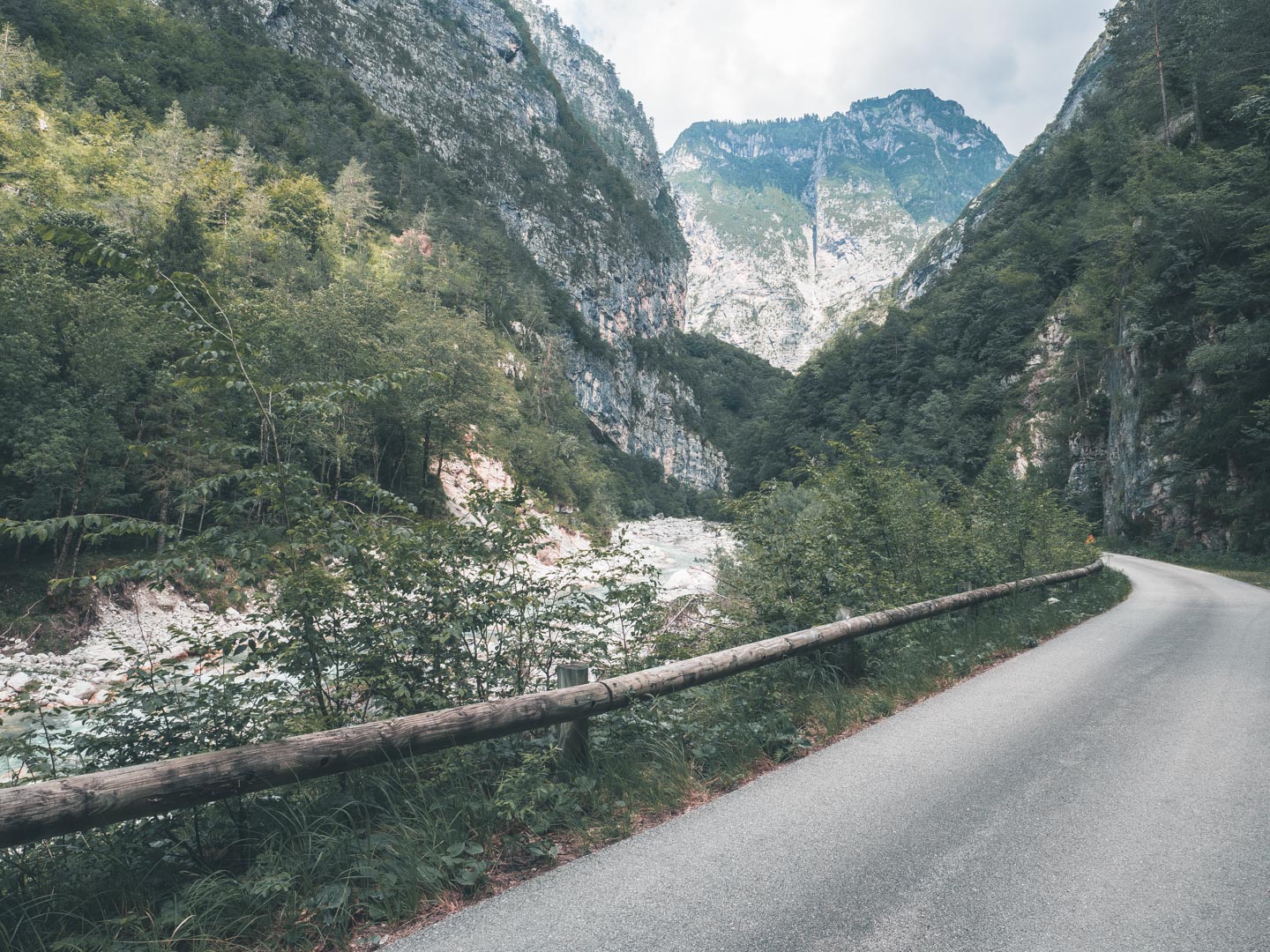 The GLR 41 motorcycle adventure route explores the Pre Alps of Northern Italy. Navigating from Aviano in the south towards Lozzo di Cadore in the north. This 189-kilometer long adventure route knows 22.5km of off-road sections. Read all about this GLR 41 down below!

At the foot of the Carnic Prealps, your GLR 41 starts in the village of Aviano. It’s time to fuel up here because you won’t see any fuel station for the upcoming kilometers!

Follow the Via Monte Cavallo up the mountain towards the ski resort of Piancavallo. This winding road leads you up the mountain. At the highest point, please take a moment to look behind and admire the Venetian plains. 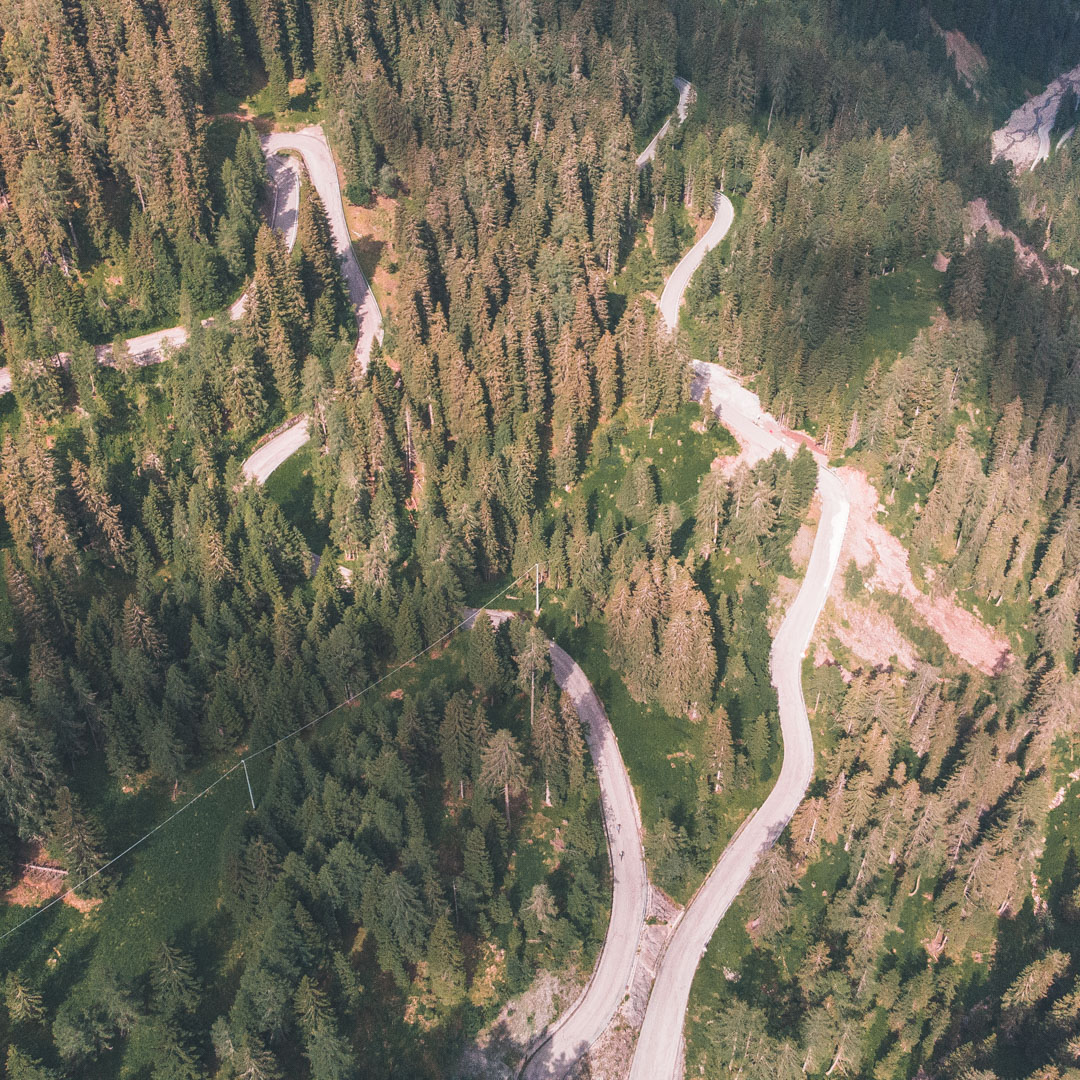 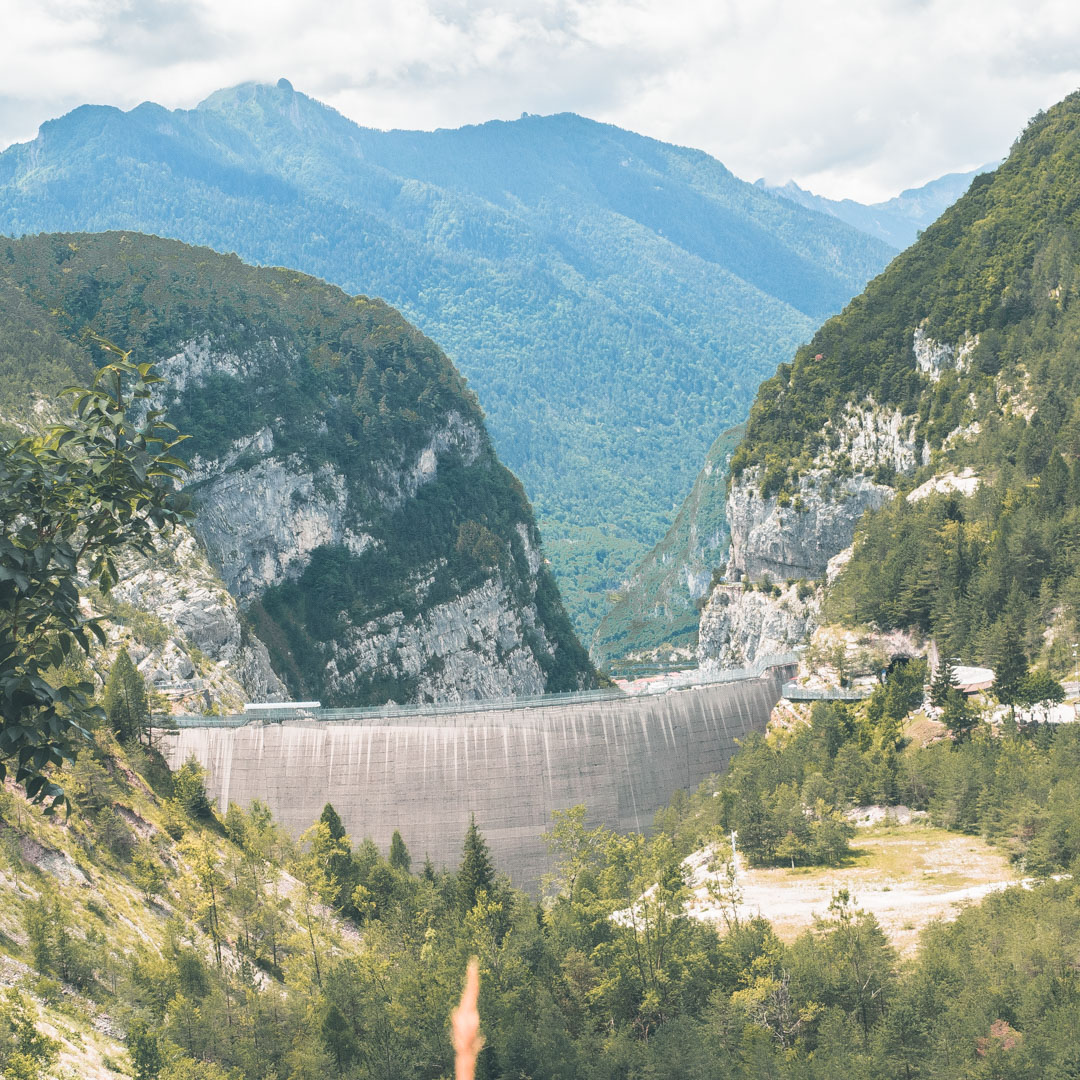 You’ll circle the small Ski resort village. A small road at the north side of this village leads you deeper into the Prealps. If you’re looking for a great spot to pitch your tent for the night, take a look at the campsite of “Campeggio Luna”. I’ve never been so welcome before!

The 13km long winding road with 28 hairpin turns leads you towards lake Barcis. It’s here where you need to take the long way around the lake. There’s a small tunnel and bridge which leads you across the dam. After the Barcis Dam, follow the SR251 to the west.

The SR251 follows the narrow ravine up north towards the small village of Cimolais. It’s here where you can make a small detour to explore the glacial washouts in the Friulian Dolomites Natural Park. You’ll follow a narrow road beside the “Torrente Cimoliana”. Gradually this river disappears into small streams and you’re able to ride over the glacial washouts. This one-way road knows 12.7 kilometers of off-road section.

Back at the main road, you travel west. The SR251 leads you to the next landmark of the GLR 41. The disused Vajont dam has some tragic history. The Dam was part of a major landslide in 1963. A museum near the dam gives some interesting insights!

While crossing the border into the region of Veneto at Longarone, you continue your adventure with the SP251 to the north. After 18.3km at Dozza, you have to decide if you want to follow the original GLR 41, or if you want to continue on the Back-up Track to avoid the off-road section ahead.

Back on the main road, follow the SS51 to connect with the Back-up Track. This road leads you to your destination at Lozzo di Cadore. But your adventure isn’t over yet!

At Lozzo di Cadore, there’s a small road leading up the mountain. This road is so narrow that traffic is restricted. You’re only allowed to ride up the road up until noon. After 13:00, only downwards traffic is allowed. Be aware of this when you want to explore this last part of the GLR 41!

This road is worthwhile! 26 hairpin turns up until you arrive at the off-road section. This gravel path leads you to Rifugio Baion where you can enjoy the beautiful vista! When it’s time to come down again, you’re able to continue your adventure on several other GLRs. For more information about the connecting adventure route, please see the connections section down below. 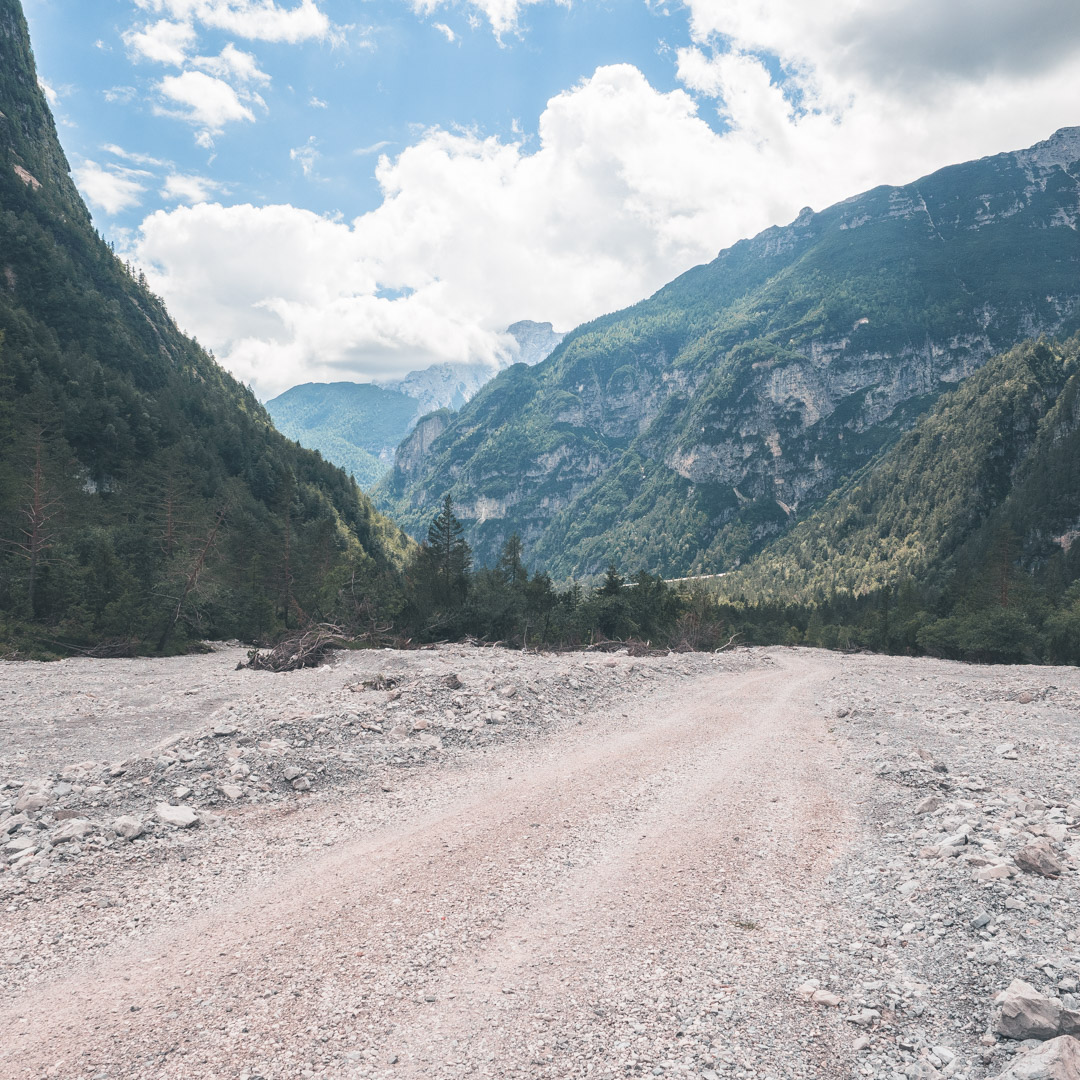 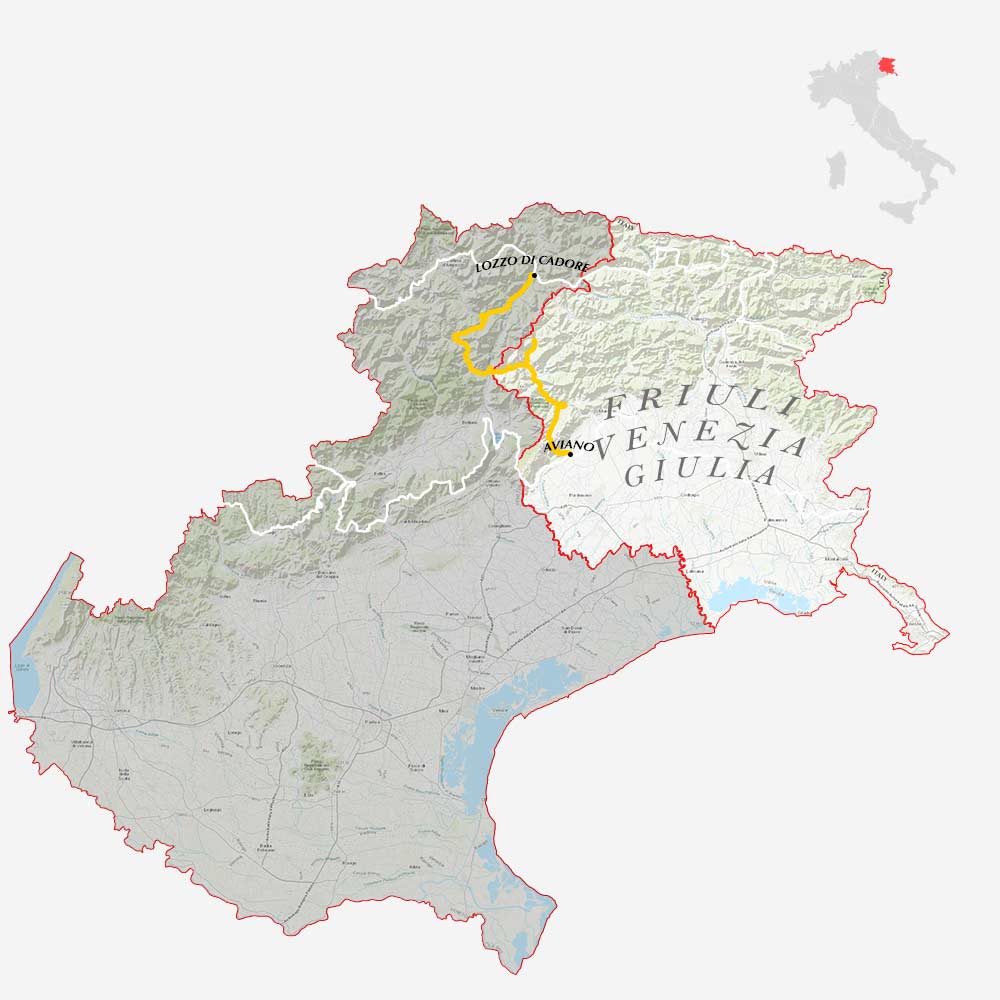 The Friuli Venezia Giulia region is situated in the North East of Italy. As its name may suggest otherwise, Venice is not located in this region. Italian, German, and Italian are spoken in the region. Besides its rich Italian cuisine and history, the Friuli Venezia Giulia region is famous for its wide variety of landscapes. From the plains to the south, to the Prealps and Carnic, and the Julian Alps to the North.

I hope this sounds like music for us as Adventurisers. With 42% of the total area described as mountainous and 19% as hilly, it may sound obvious that the majority of the GLRs are located to the North. As a natural consequence, the climate in the North is designated as Alpine. This means that temperatures may vary widely between the different seasons.

While exploring the region, it’s good to know a lot of the Alpine landscapes are protected Natural Reserves. If you’re merely looking for the long gravel roads, I would suggest taking the southernmost routes. 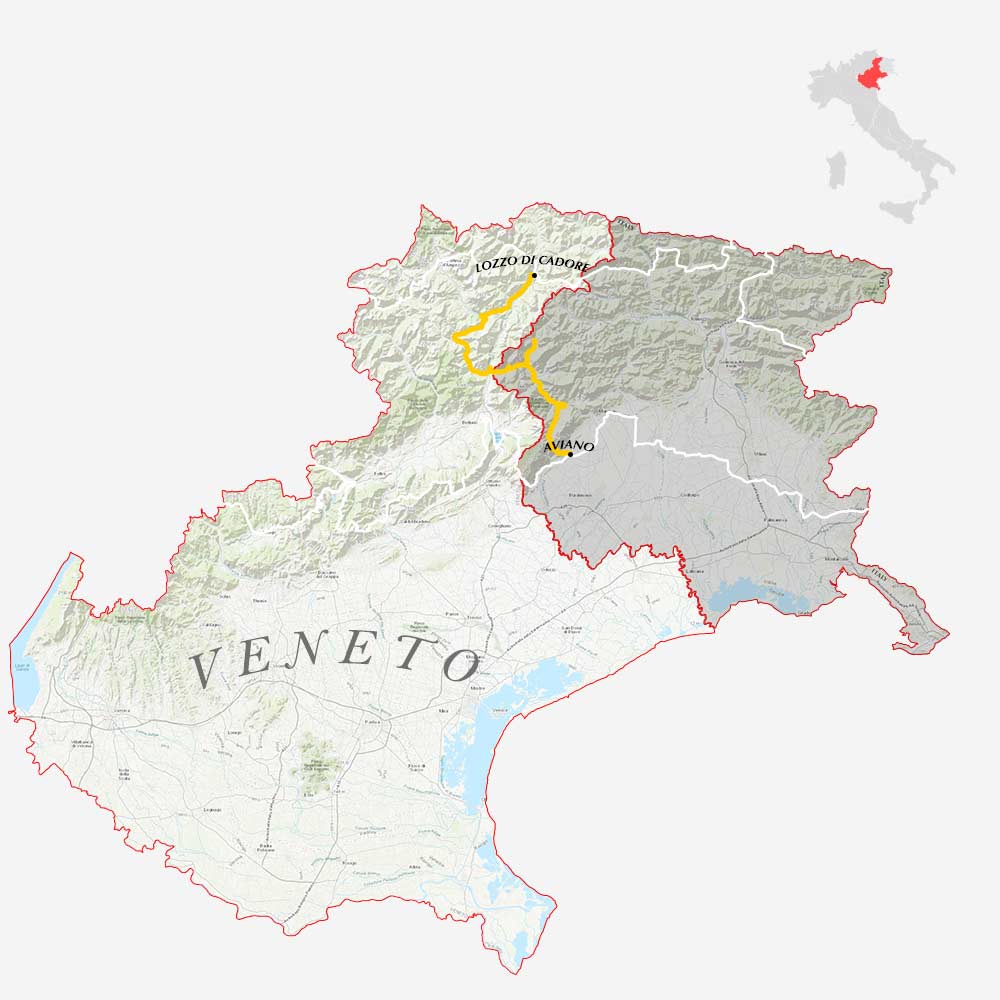 The region of Veneto is located in the north-eastern part of Italy. Veneto is in contrast with its direct neighbors Friuli-Venezia Giulia and Trentino South-Tyrol, not an autonomous region. Locals are known as Venetians and speak besides Italian, mostly Venetian.

The region of Veneto consists of seven provinces. Venezia houses the region’s capital. Other provinces are Belluno, Treviso, Vicenza, Verona, Padova, and Rovigo.

One-third of the terrain is mountainous. The region is home to the Carnic Alps, eastern Dolomites, and Venetian Prealps. With the highest peak in the Dolomites at 3342m, the Marmolada massif stands tall over the entire region.

Besides the mountains, Veneto is covered by hills and plains. The latter, mostly situated around the Po river. At last, Vento has a total length of 200km of shoreline, of which half are beaches.

Due to the diversity of terrain, Veneto knows several climates. It knows a Continental climate around the coast and into the lower hills. When you traverse more inland, the climate changes to a predominantly Alpine climate.

Precipitations are scarce in the more southern parts of the region. To the north, precipitation levels rise up to 1100 mm per year, with an abundance of 3200mm in the Bellunese Prealps. 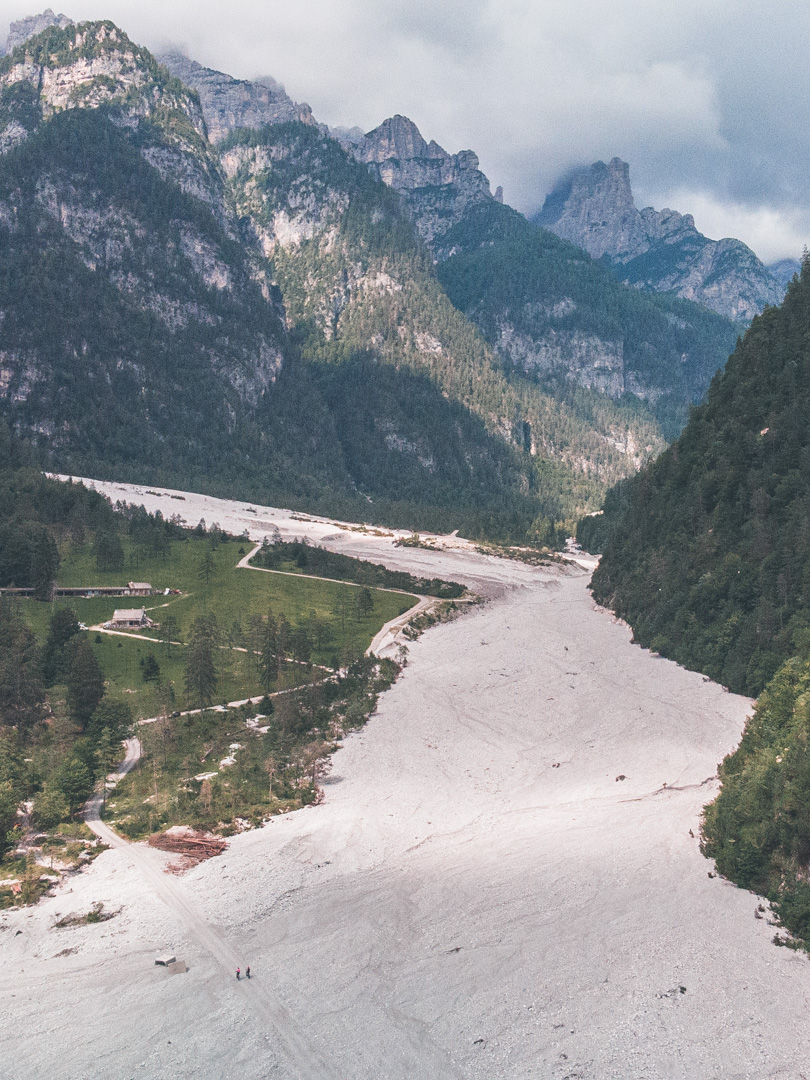 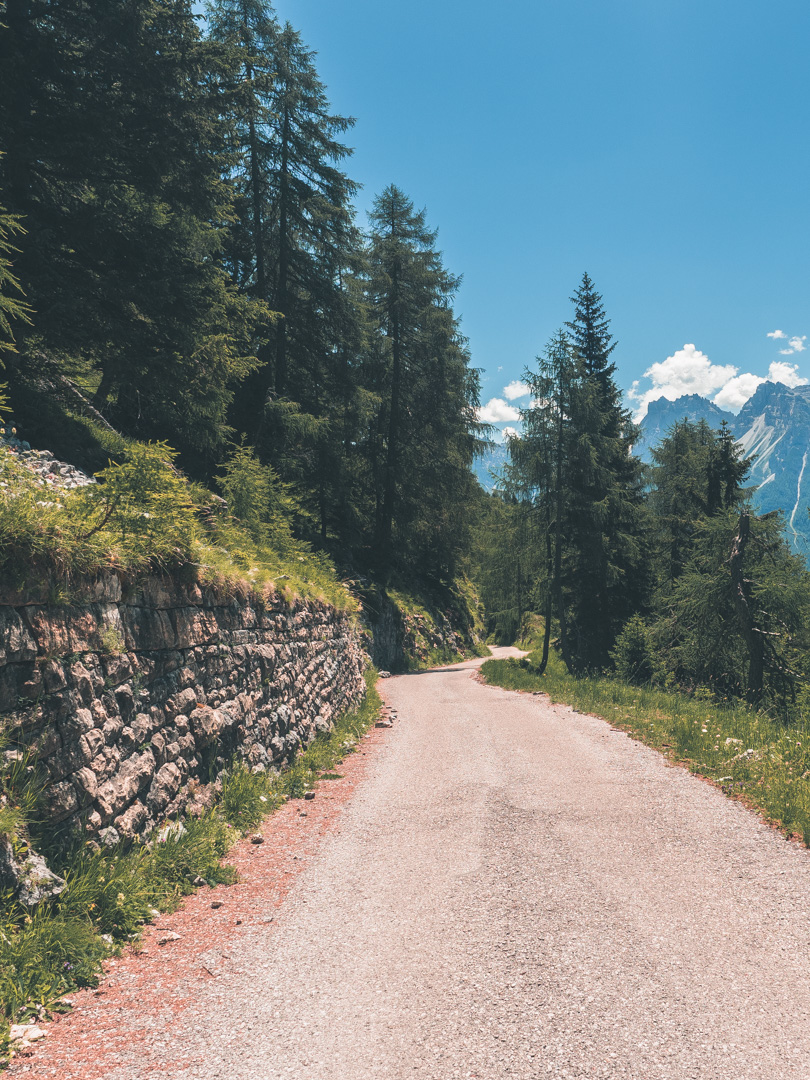 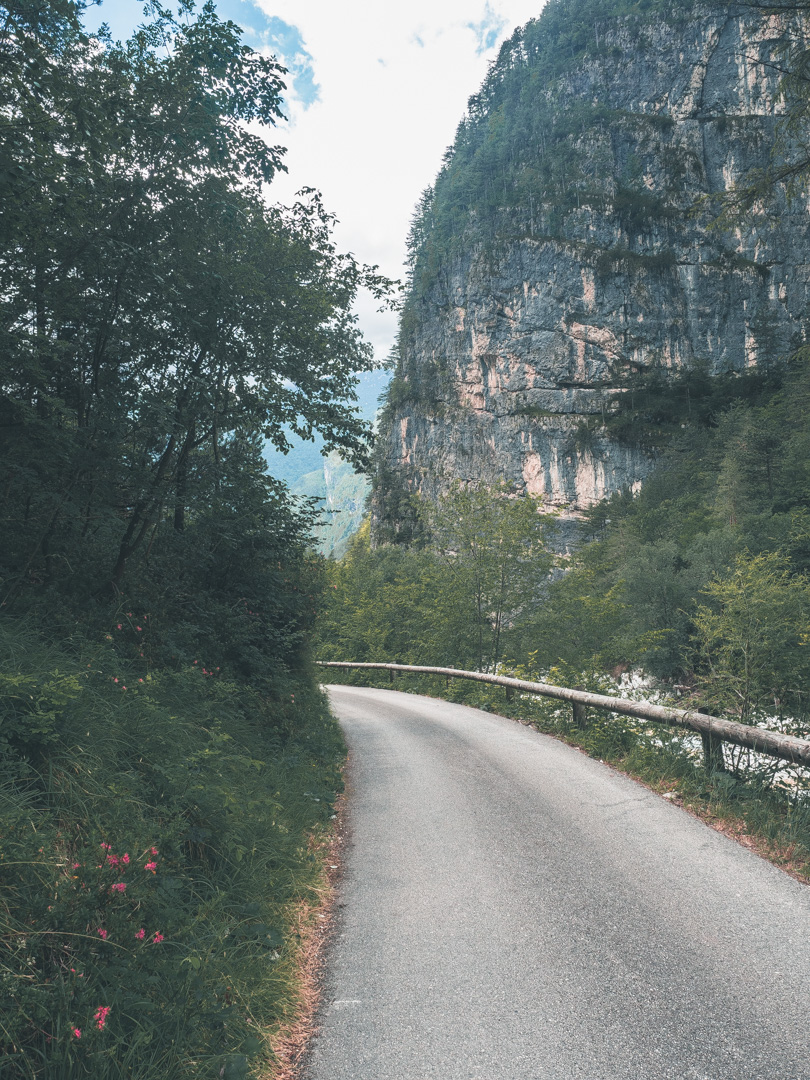 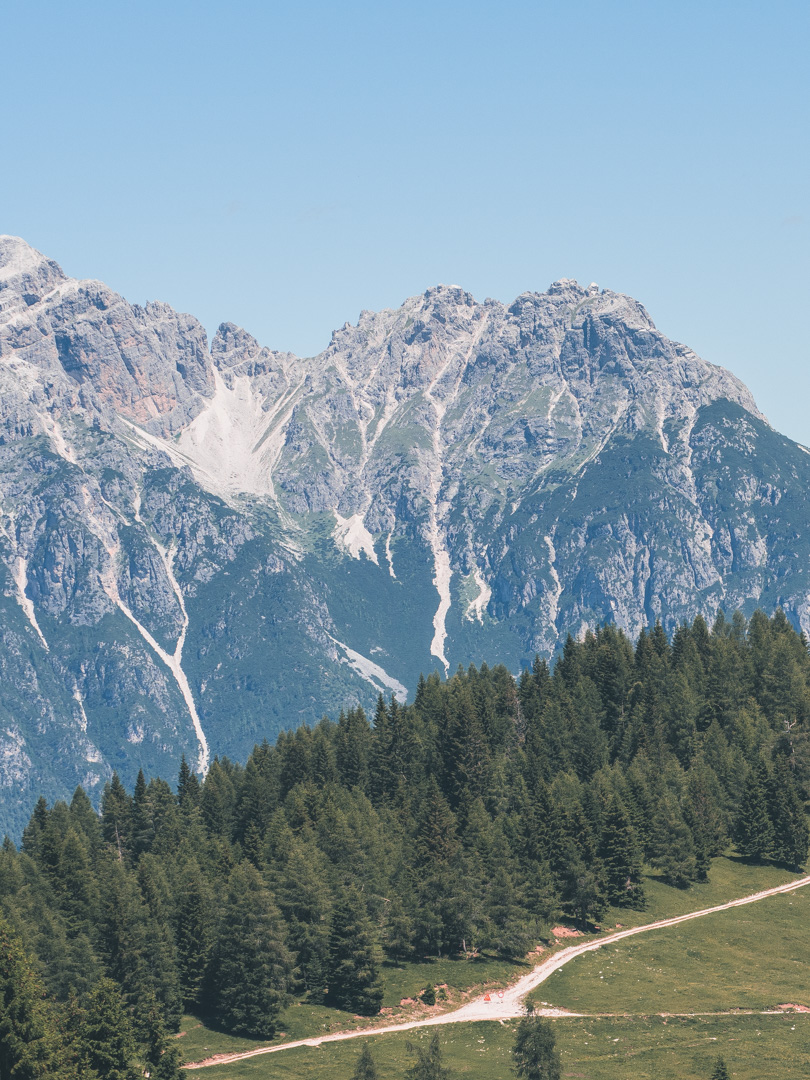 Thank you for downloading the GLR 41! Good luck with Adventurising Europe. Speaking of Adventurising Europe, to keep the project going and free, we’re relying on a mix of sponsored advertisements and Adventuriser donations. Do you like what we’re doing and you want to support the project? Please consider a donation. You can read more about donations and support here.

You’ve explored the GLR 40 and, you’re looking for more? Great, because Northern Italy has so much more to offer! At Lozzo di Cadore, you choose between two GLRs.

Take the GLR 42 to the west. This 108-kilometer route explores the Dolomites. This route crosses several mountain passes and ends in Canazei, the adventure capital of the Italian Dolomites.

With the Prealps to the north and the Venetian plains to the south, at Aviano, you can choose between two diverse routes to continue your journey.

Take the GLR 40 to the west. This 225-kilometer adventure route explores a wide variety of passes through the Italian Prealps. You’ll end this route at Arsiè.

Or travel east with the GLR 45 across the Slovenian border. With this route, you’ll explore the Venetian plains. During summer, this route knows temperatures well above 40 degrees celsius! You’ll finish this route at Čepovan in Slovenia. 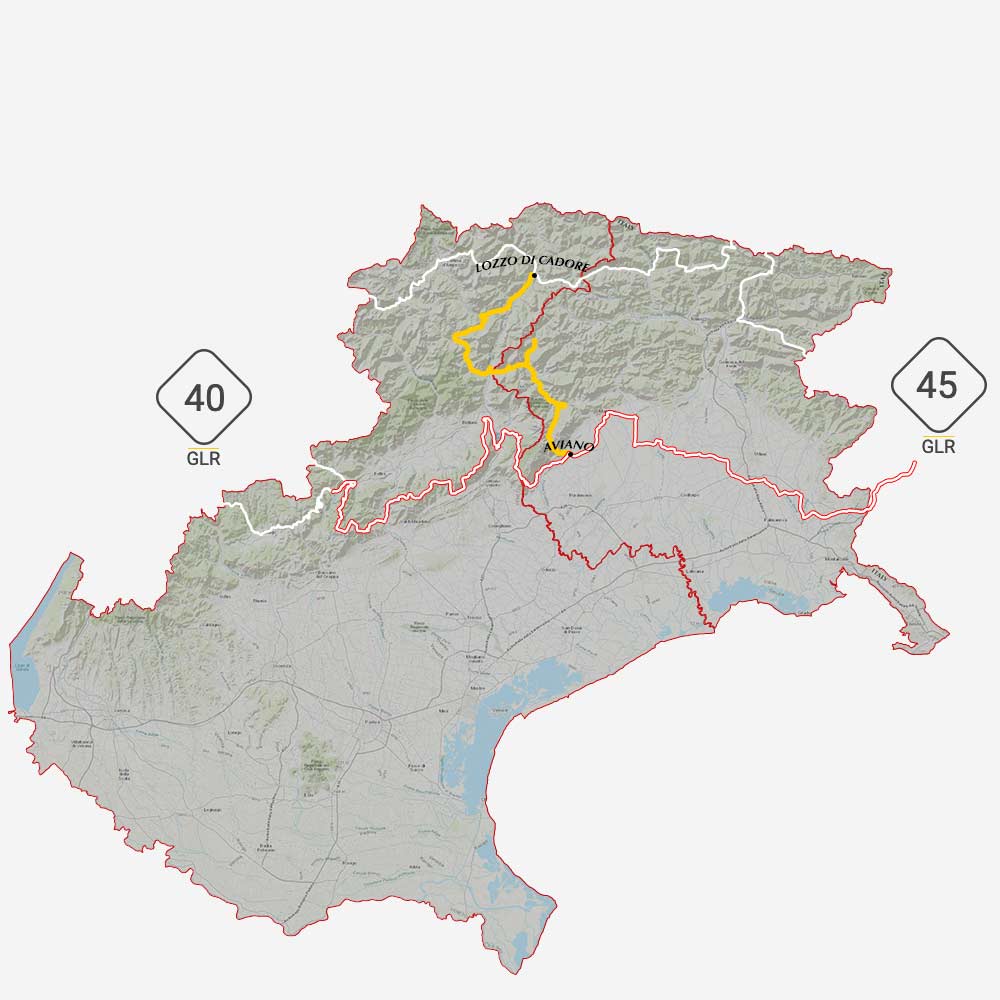