The GLR 47 explores the endless forests of Slovenia. From the Goriška Region in the West to the Inner Carniola to the South. Go on an adventure with this 89km adventure route with 65 kilometers of off-road sections! Don’t wait and adventurise this GLR!

The GLR 47 is a Moderate route and can be challenging for beginning adventure riders. More information about the GLR Route Gradings System. 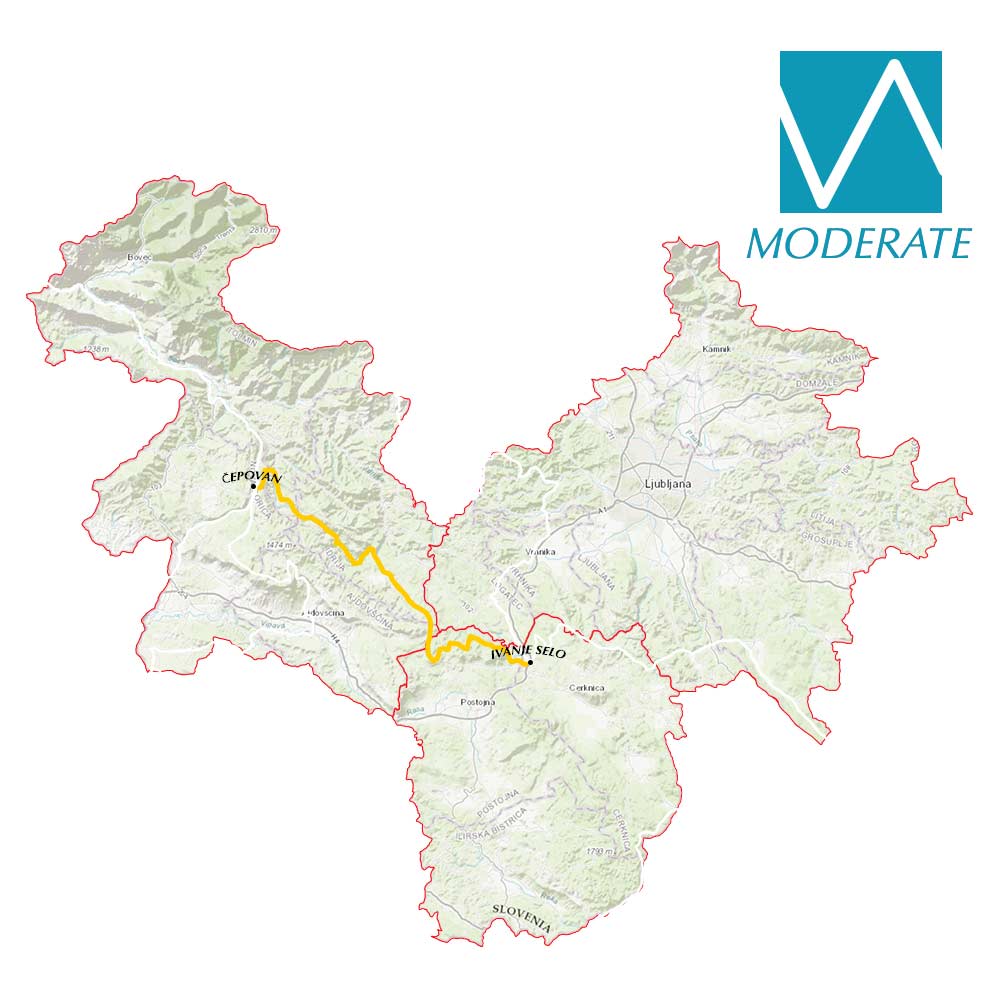 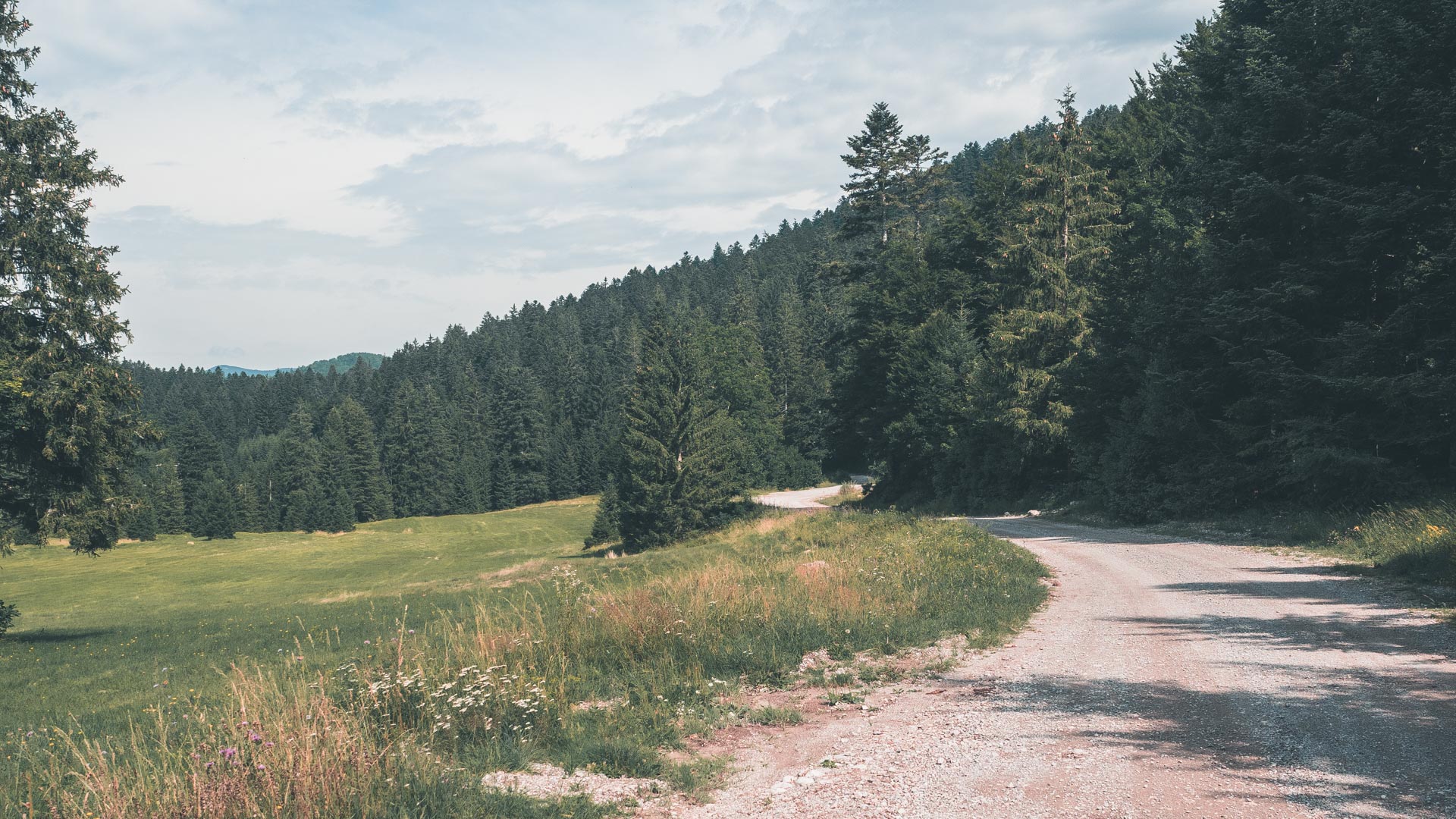 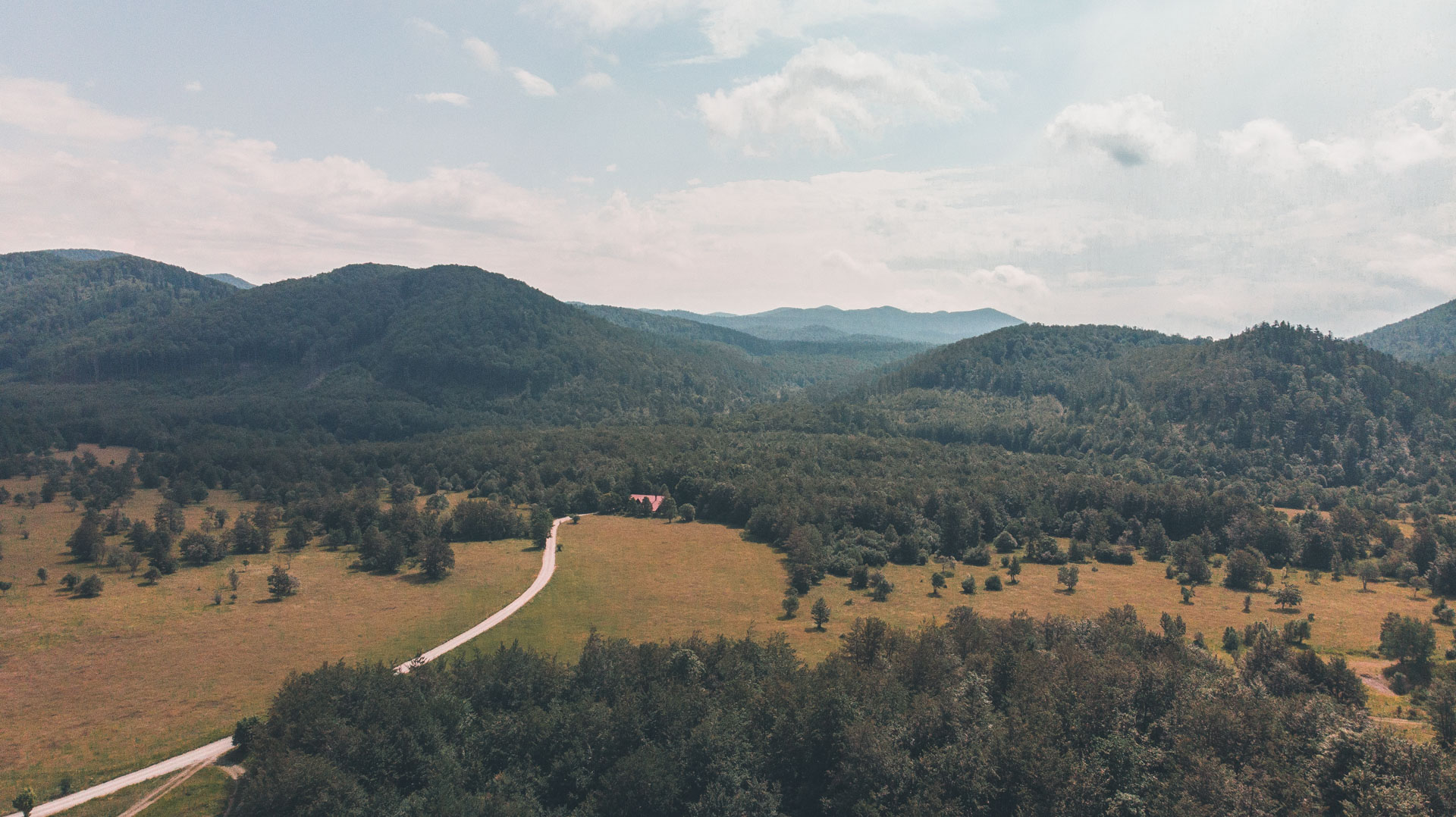 Slovenia has so many things we love as adventure riders. You have the Triglav National Park to the North with Alpine peaks. You can ride alongside the coast at Koper, but there’s something Slovenia is most famous for. Slovenia is known as a forested country. This GLR 47 is going to guide you through this immense network of forest roads through the regions of Goriška and Inner Carniola. From Čepovan towards Ivanje Selo, this 89-kilometer adventure route is not going to disappoint you!

You start your adventure at a small town in the hills called Čepovan. Just after your departure, you’re already hitting the first off-road section. The entire route is circumnavigated with Back-up Tracks, but to be honest, please don’t explore this 73% off-road route when you’re not planning on riding off-road. 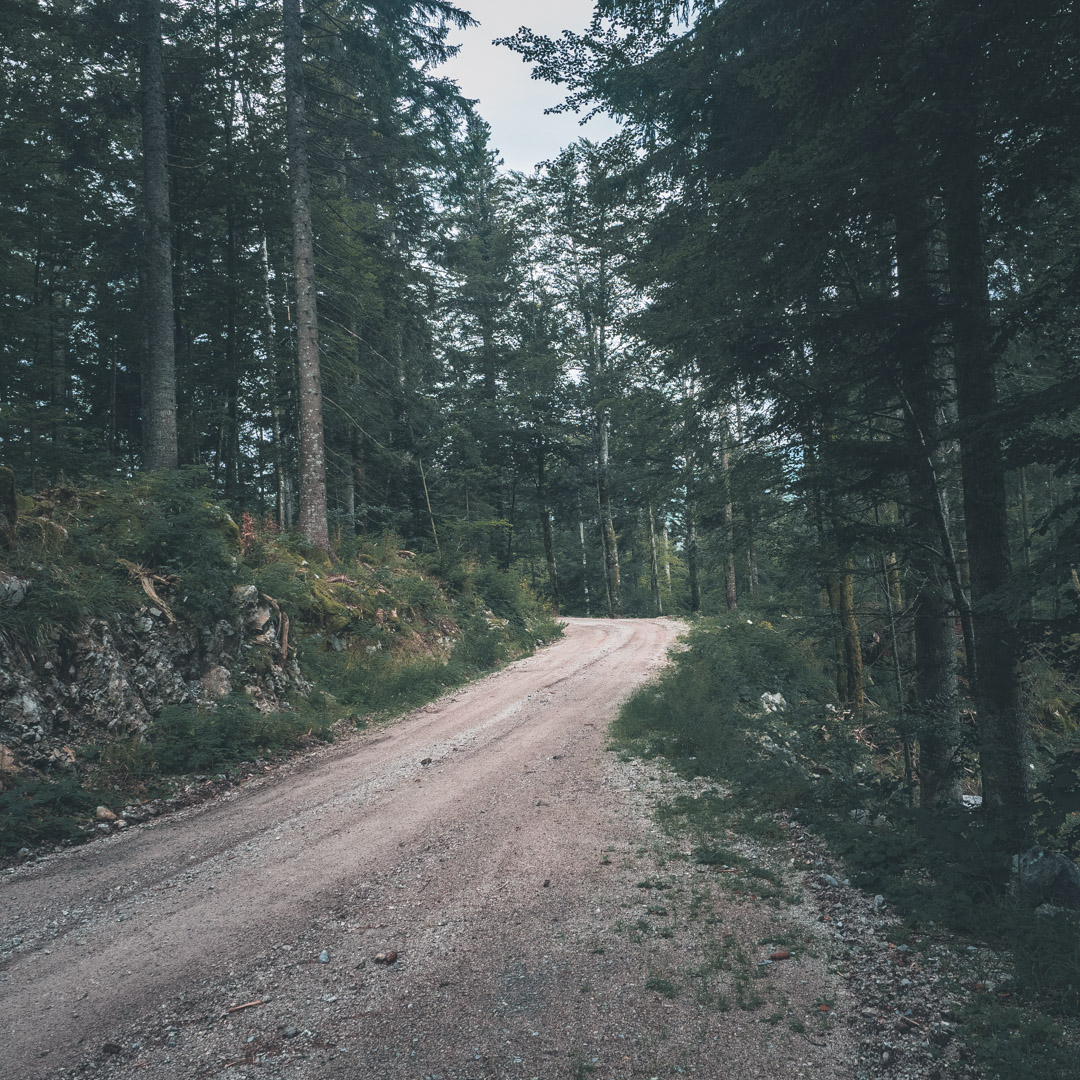 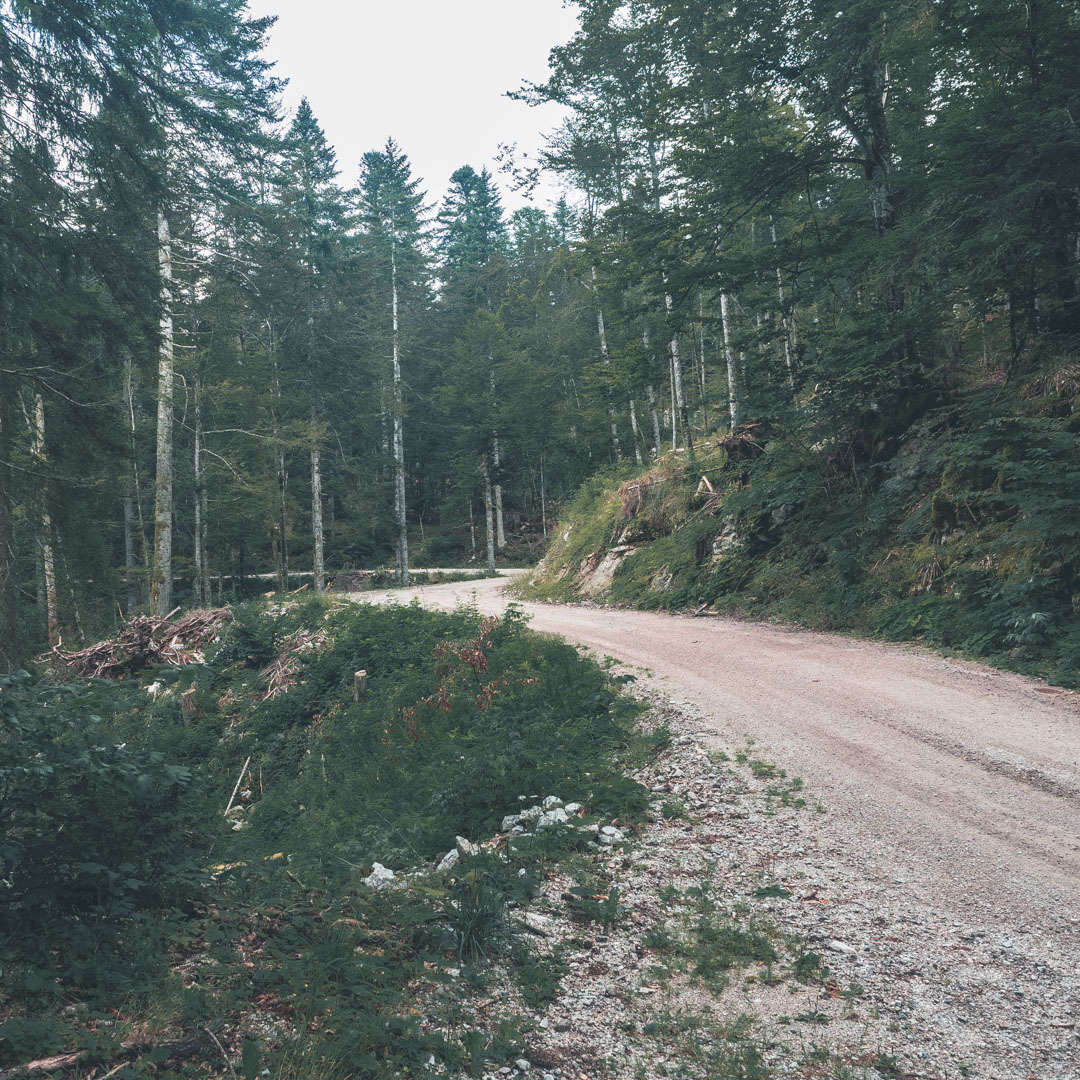 After the first off-road section of 7,3km, there’s a small on-road section guiding you towards the next forest road. This time a 17,6-kilometer gravel road lies in front of you. The road crosses the endless views of trees and brushes. Turn after turn there’s more forest to be explored. A small side note: there are bears living in this area, so be responsible with your food during your breaks!

The next on-road section only lasts for 2,6 kilometers. If you want to, you’re able to continue via this on-road section with The Back-up Track section 3. Otherwise, you’re in for the next forest road! Some on- and off-road sections follow each other up in a nice tempo, but this is all to prepare you for the last big off-road section. This forest road will guide you towards your destination at Ivanje Selo for over 31 kilometers of unpaved road.

At your destination, you’re able to continue your Slovenian off-road adventure with two more adventure routes. More about these down below in the connection section. 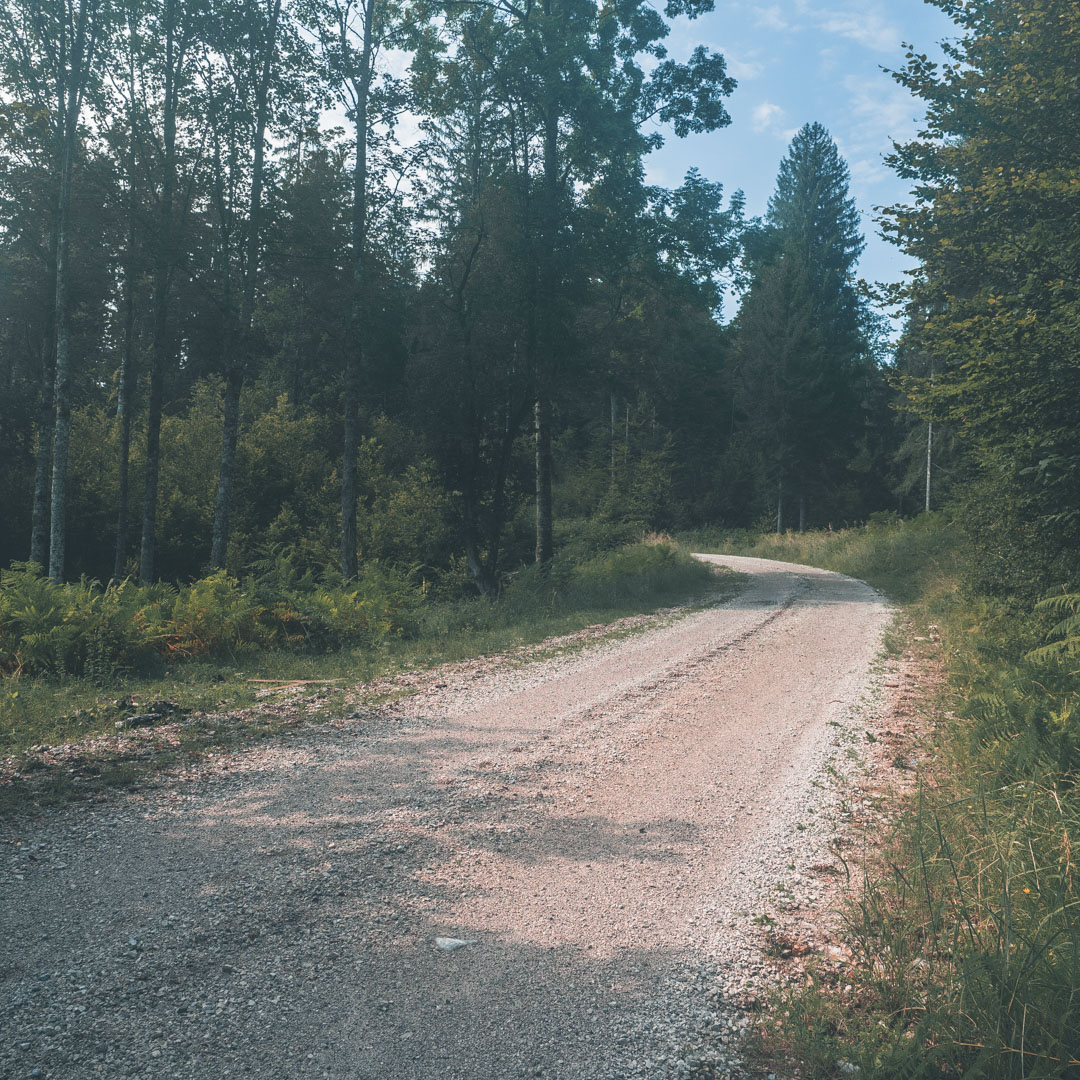 The Goriška region is situated to the west of Slovenia bordering Italy. The name Goriška is an adjective referring to the city of Gorizia in Italy. The Region stretches from the Julian Alps in the North and follows the Soča River down south up to Nova Gorica and the Karst Plateau. It encompasses several municipalities like Tolmin and Nova Gorica which the GLRs explore.

The region’s climate is influenced by the variety of reliefs like the Julian Alps and the Adriatic sea. The Goriška region has a continental climate with great differences between summer and winter. Near the coastal areas, a more Mediterranean climate gets overhand. While up north to the Soča Valley, the climate starts to shift towards a more Alpine-influenced one. Goriška is best Adventurised from late spring up until early autumn.

Besides the region’s natural beauty, the Goriška region has a rich history as well. Dating back to the early 600 and its first Slavic Settlements, up to modern history and the disintegration of Yugoslavia. If you love history and visiting important landmarks, you’re going to enjoy the Goriška region! 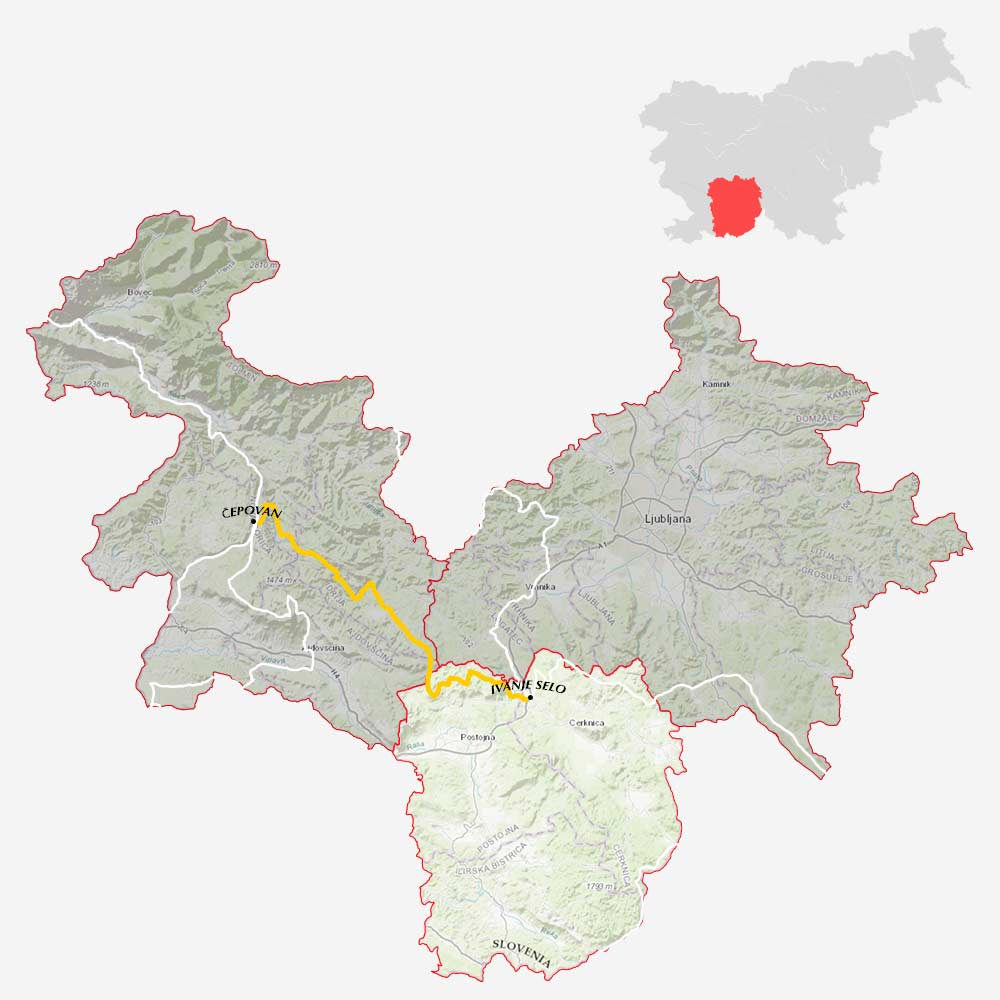 The Inner Carniola region is the smallest and least populated region of Slovenia. This South-Western region is especially known for its dense forests. With its most famous natural landmarks the Postojna Cave and Lake Cerknica, it isn’t the most spectacular region to explore.

But why would you explore this region then? Well, it has an immense network of forest roads crossing through almost every forest. Combine this with an extremely low population density and almost no tourists, and you have yourself the perfect place to adventure ride.

One important side note, bears are living in the forests! So be aware when you’re planning to camp. Always hide your food outside the camp! 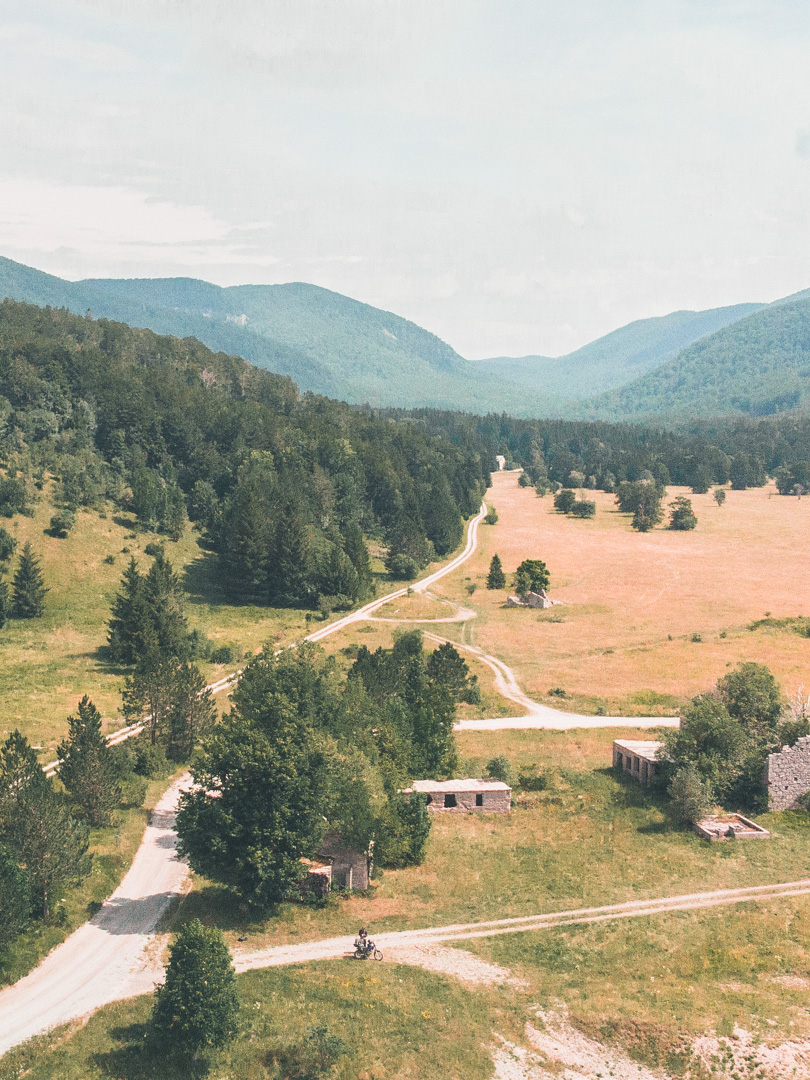 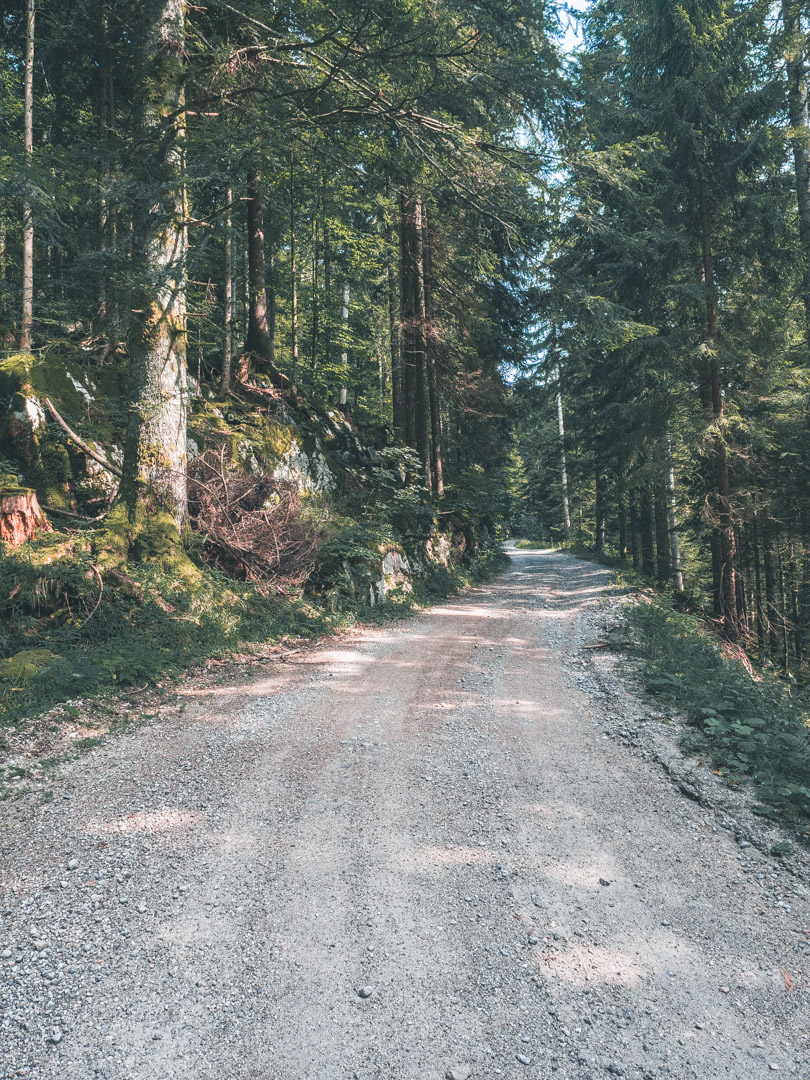 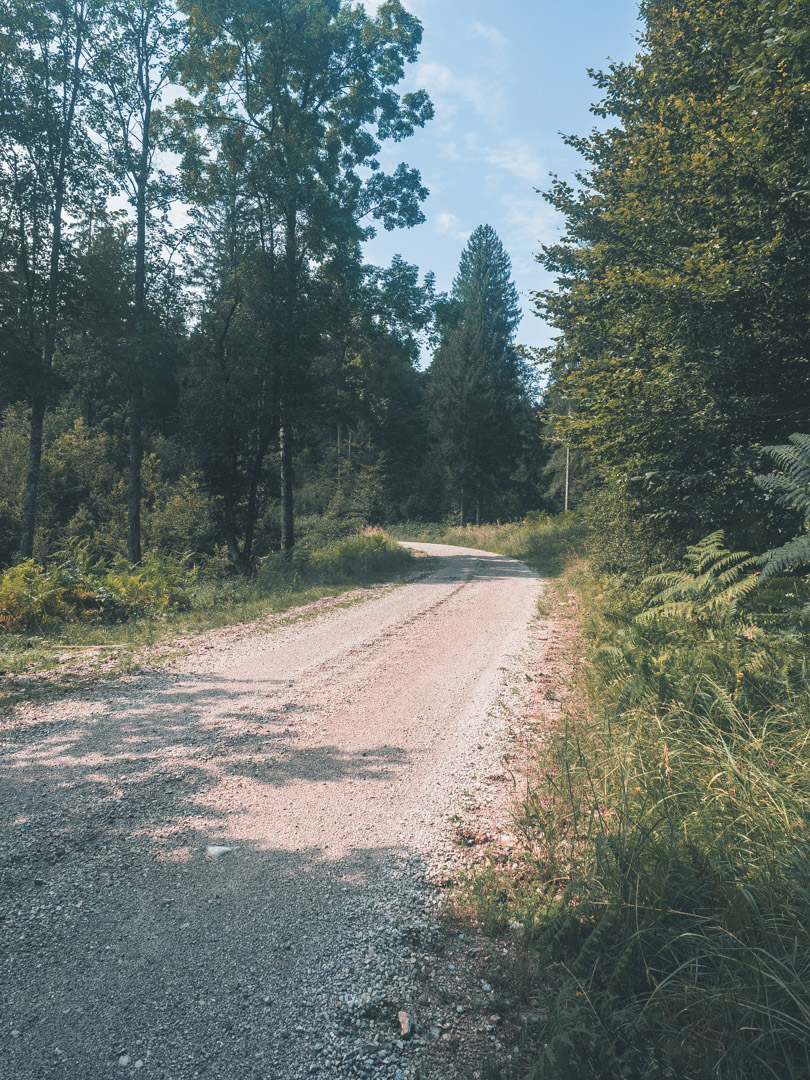 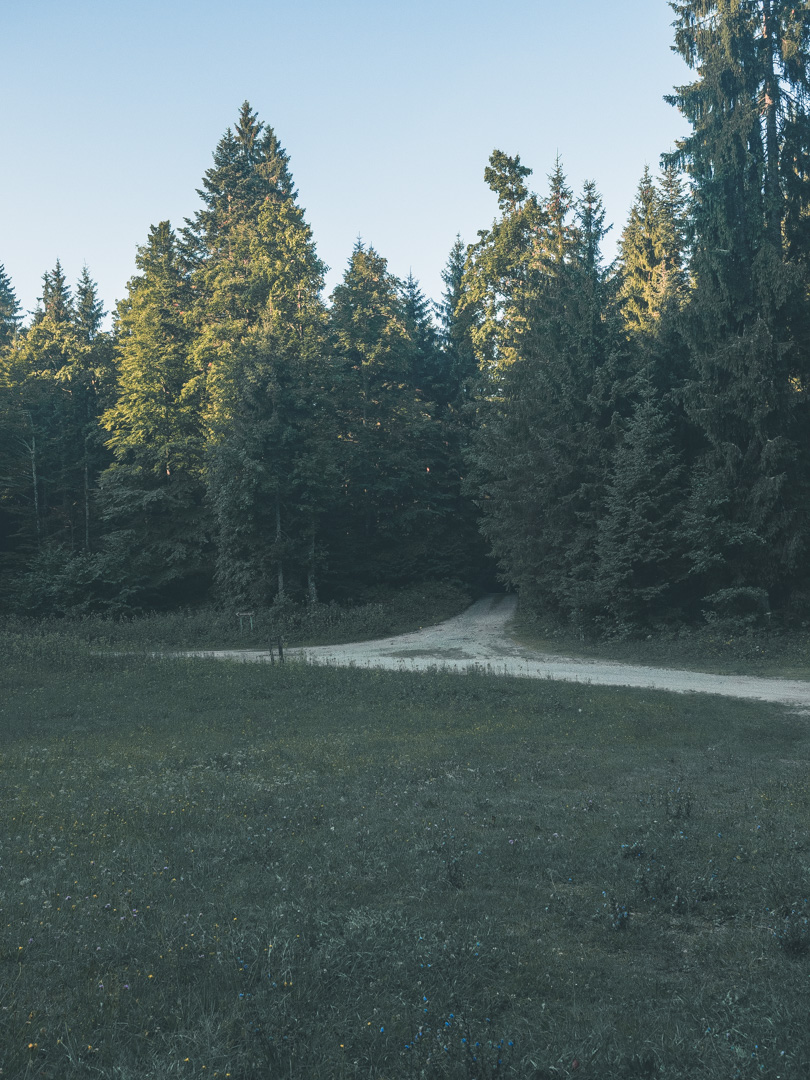 Thank you for downloading the GLR 47! Good luck with Adventurising Europe. Speaking of Adventurising Europe, to keep the project going and free, we’re relying on a mix of sponsored advertisements and Adventuriser donations. Do you like what we’re doing and you want to support the project? Please consider a donation. You can read more about donations and support here. 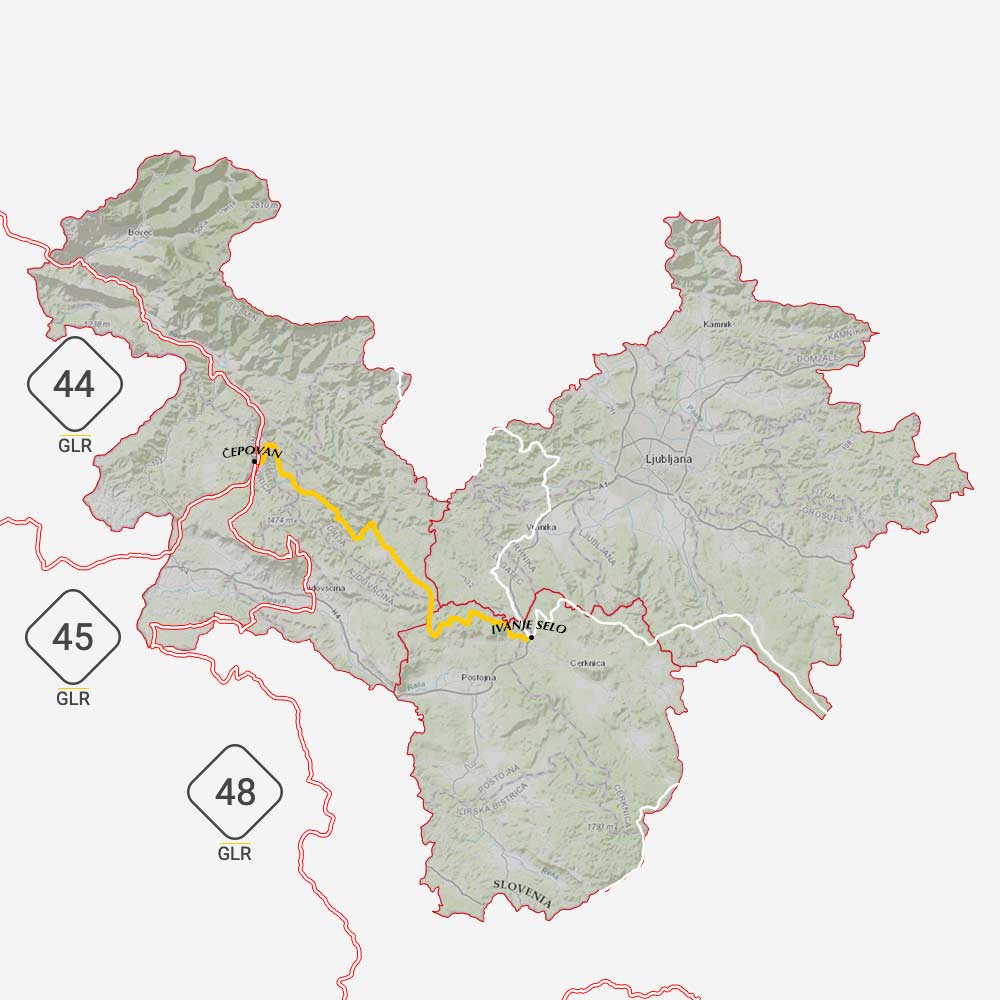 At the small village of Čepovan, in the valley of the rolling hills, four GLRs come together. At the end of your GLR 47 adventure, you’re able to continue your journey on three of those.

The GLR 44 travels up North and explores the border region between Italy and Slovenia. Eventually, this route crosses the border a second time, now into Austrian. After 160 kilometers, this route ends at the Austrian town of Hermagor-Pressegger See.

Rather interested in the plains south of the Dolomites? The GLR 45 guides you to the west. Crossing the border into Italy and exploring the dry meltwater river beds. After 145 kilometers, this route ends at Aviano. Be aware that during summer this route can be extremely hot!

Or choose the GLR 48 and head down south into Croatia. This adventure route explores mainly the Istrian peninsula. With a length of 361-kilometers, this route won’t disappoint you if you’re looking for something different! From forest roads up to rocky tracks. The GLR 48 ends at Kamenjak in Croatia.

At Ivanje Selo, you’re able to continue your motorcycle adventure in two directions. The GLR 46 guides you up north. This 356-kilometer adventure route explores the mountainous regions of Slovenia and crosses the border into Austria. Choose this adventure route if you want to spend some time in the mountains.

Or choose the GLR 50 down south and explore one of the least populated areas of Slovenia. With 93 kilometers, this is the perfect route to finish within a day! The GLR 50 ends at Kočevje. 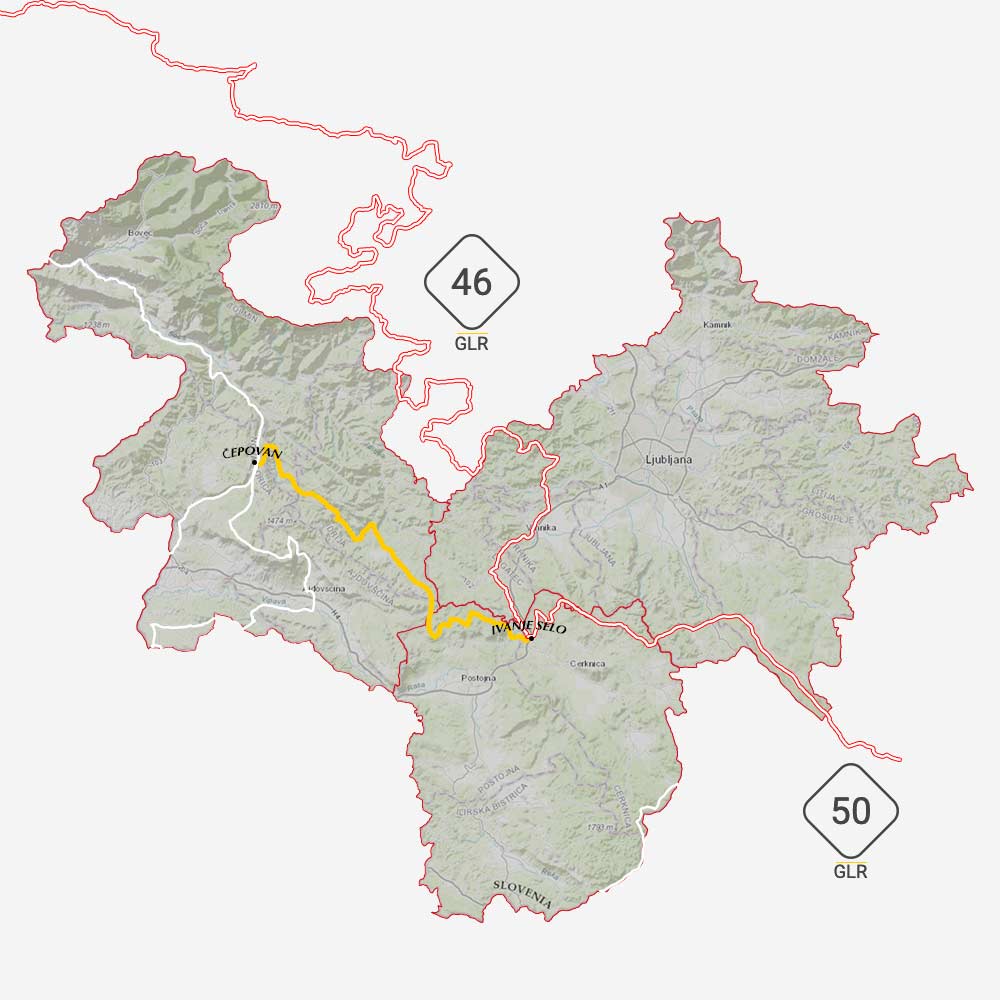